Mountain Langbiang in Dalat. The highest mountain in the vicinity of Dalat

Love scenic views from a height of 2000 meters? Then you definitely need to visit one of the most popular places in Dalat – Mount Langbiang, which is the highest point in the surrounding area where our Soviet UAZ vehicles briskly, carrying hundreds of tourists daily.

When people ask me what it costs to fly to Vietnam and what to see there, I replied without hesitation that it is necessary to go there to enjoy the incredible beauty of Vietnamese nature! And indeed – the numerous pagodas of Vietnam are monotonous and alien to the Russian soul, funny and noisy bars are no different from ours, and Vietnamese cuisine and massage, though beyond praise, can now be found in almost any more or less large regional center of our Homeland . Fog on the side of the mountain Lang Biang

But such natural objects, as in Vietnam, in our latitudes can not be found at all desire! And if we are all accustomed to the sea, and almost everyone in the computer has several folders with a name like “Sea Vacations,” not everyone can boast pictures from the top of the mountain! And the mountains of Vietnam are quite special, and it’s pretty easy to climb them, and most importantly, this can be done without stopping for more than a day from a beach holiday.

One of the most picturesque Vietnamese mountains is located 12 kilometers north of the capital of the South Vietnamese province of Lamdong – the city of Dalat, a popular tourist destination town, famous for its nature and climate (in Dalat the same temperature is +24 ° C – +27 ° C during the day).

The mountain is called – Langbiang (Lang Biang). This is the highest mountain in the Dalat environs, it has as many as 5 volcanic peaks from 2100 to 2400 meters high.

As always, the easiest way is to rent a bike or order a taxi. Mark a point on the map or show the driver, and go.

You can easily recognize the territory of the park by a large gate, in front of which you will be sure to be stopped and informed that bikes are no longer allowed to enter. Still, delivery to the top of the mountain is their bread. We pay 5.000 dong for parking and go. To the left of the entrance is the cashier, where you have to pay.

Of course, you can climb to the top on your own, but this is more than a kilometer up, and the road itself will take about 2 hours. So decide for yourself.

Having bought tickets, you need to wait until you get a full car (5-6 people), but for now you can take a walk around the neighborhood and take pictures of local beauty. Just do not be surprised. At the top of the tourists carry Soviet cars UAZ, painted in green with the logo of the mountain. The ascent along a narrow road takes about 20 minutes.

be ready the fact that Vietnamese drivers drive at a breakneck speed, put the pedal on the floor and let go at the top, so who is afraid – it makes sense to ask for a calmer driver or rent a bicycle.
By the way, this “excess” of speed here is due to historically. Vietnamese say that during the war The North with the US-backed South on Langbiang were the fortified positions of the northerners. And they, too, had to constantly drive along this winding and steep road, which is now being taken up by tourists. But if now the Vietnamese just gossip, then it was necessary, because the track was being shot all the time by the US military, including from the air. And in order not to turn into a sieve, drivers had to forget about the brakes. At the same time, they say, at that time there were practically no accidents caused by drivers, not like now. Although then they drove much faster. So be careful. On one of the peaks (just a little lower than the summit) a wonderful observation deck was built with a breathtaking view of the valley! Rivers, lakes, forests, traditional Vietnamese houses and the horizon line – that’s what your palm will be at the height of Lang Biang. What is interesting, except for species

In addition to the contemplation of the beautiful view, you will have a unique opportunity to taste unique Vietnamese cuisine at an altitude of 2000 meters and drink this Vietnamese coffee luvak. The time spent at the top is limited to 30 minutes, which is usually more than enough. However, if you decide to stay, you can leave by another car, that’s just not the fact that she will be free. Going down to the foot of the mountain, you do not need to leave the park, you can still ride on zebras or just walk by park area. By the way, they say that Langbing zebras are not at all zebras, but a fruit ingenuity and wit Vietnamese who simply paint ordinary striped horses! A good marketing move is to paint a zebra horse

In general, if you really want to see something truly unforgettable, breathtaking and bring unique photos from vacation – you can safely fly to Vietnam to conquer Langbiang. You are guaranteed a sea of ​​positive and good mood! 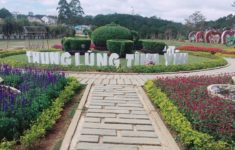 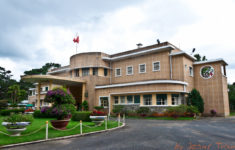 Da Lat
Bao Dai Palace in Dalat: Emperor’s modest summer residence
Visiting Dalat, it is simply impossible to ignore the palace of Bao Dai. Despite the fact that this building ... 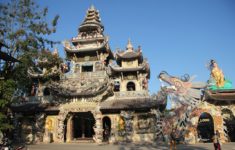 Da Lat
Linh Phuoc Pagoda: giant glass dragon and statue of the flower goddess
The Linh Phuoc Pagoda in Dalat can, in a good way, be called Disneyland Pagodas. There are so many ...
Отмена