Michon Ruins in Da Nang: The Cultural Heritage of the Capital of Tjampa Empire

Vietnam has preserved to our time many architectural wonders belonging to different eras, remnants of bygone cultures. And one of them is fancy temples scattered across the Kuangnam plain, combined into a complex known as the Mishon ruins near Da Nang.

We also advise you to read our article about another heritage of the Cham, located in Nha Trang – Towers Po Nagar.

What do we know about the secrets left to us by the mysterious Cham civilization (they themselves called themselves “tyam”)? These people founded a whole empire that emerged in the central part of modern Vietnam in the second century. Created from small principalities, the state of Tjampa existed practically until the beginning of the eighteenth century.

From the seventh to the tenth century, the Cham civilization experienced rapid flourishing. It was a “golden age” for art and architecture, crafts developed, Cham language was formed. Cham culture was directed to the religious side. Their creations, in which the influence of Indian art was felt, were created in honor of persons from the Hindu pantheon and maintained in strict canonical frames. Information about a strange attitude towards the notorious copyright has reached our time. Strangely enough, but all the glory and rights did not belong to the performer of the masterpiece, but to the person who paid the money for it.

Centuries of wars did not spare the art of the Cham; we only have to imagine what their canvases, carpets and painted vases were. Alas, even their amazing temples, decorated with fancy patterns and inscriptions, came to us in a very deplorable form.

The decline of the Cham civilization was also detrimental to the temples that filled the Kuangnam plain. Religious life and streams of pilgrims completely stopped by the sixteenth century. Once a sacred place began to fall into neglect, and, as if in confirmation of the proverb, the tillers of the village began to settle near Michon. New settlers built houses using materials from dilapidated temples for their needs.

Time passed, these lands were empty. Nature took her, Michon’s temples gradually became part of the jungle, disappearing for a long time from human eyes. The cultural heritage of the Empire of Tjampa has become an architectural ghost. The sleeping fairy princess needed a kiss from the prince to wake up and return to the people. And to the temples of Michon, by a twist of fate, a French priest came. The courtyard was the end of the nineteenth century, and Jean Bruyere, along with the military who accompanied him, were the first to see the beauty of the jungles of Vietnam from humanity.

The colonial authorities showed great interest in the legacy of the Tjamp Empire. From the end of the nineteenth century to the mid forties of the last century, a study of the temple complex was conducted. Expeditions headed by French scientists were sent to the surviving temples and ruins.

Successful research on the Cham architecture interrupted the war. The years of battles brought more destruction to the temple complex than centuries of oblivion in the arms of the Vietnamese jungle. How did the buildings look like before wars with usa, can only be seen on vintage stereo photographs and in the drawings of Henri Parmanier. It took five years for scholars from international Polish-Vietnamese expeditions to research and compile a detailed report on the status of ancient temples. Enthusiasts cleared the area of ​​jungle and debris, carried out work to restore more or less surviving buildings. To this end, a method was developed that effectively strengthens masonry with Portland cement.

In the mid-nineties, the temple complex was made accessible to tourists, and at the very end of the century, Michon was officially recognized as the architectural pearl of Vietnam and included in the UNESCO lists.

Temples at the bottom of the lake

So how did the whole city appear from the temples? Eight centuries Michon was one of the imperial capitals. Scientists estimate that in a small area of ​​the valley chams erected about seventy temples. Crowned person Bhadravarman I specifically sought an atmospheric and secluded place for the construction of a Hindu temple. It was found in the center of a very small round valley near the village of Mytho. The smooth surface was once the bottom of the lake, nowadays only one stream remained from the water arteries, enveloping the temple buildings and ruins.

The temples in honor of Shiva and Vishnu, as well as the tombs for the monarchs of Tjampa, were built of special bricks, for strength they were added a bonding composition of sugar and honey. The temple complex quickly became the spiritual seat of the kingdom. Monarchs were buried there and festive ceremonies were held in honor of the highest gods. Tourists can go inside the surviving temples and towers, descend into the royal crypts. Here are preserved authentic decorations, tiles and sculptures. On the territory of the complex are scattered statues of gods, stones with incomprehensible inscriptions.

The open-air museum has a long walk. There are no restrictions here, everything can be touched, examined, temples can be visited and photographed.

The road from Da Nang to the temple complex takes about two hours. You can get on the tour bus with a group of tourists by purchasing a tour in advance, or by ordering a taxi. In the latter case, it is advisable to order a taxi for the whole time of walks along Michon. Otherwise, the taxi driver will just leave, and then have to solve the problem with the way back.

The temple complex, with its ruins, is not a park, you will need good shoes to protect your feet from the rubble, plus there are a lot of insects. In the hot months you need to take care of the water and protection from the sun, there is a shadow here, of course, but you will not constantly hide in the shadow of one building. The tourist infrastructure is still developing, the landmark is still being prepared for visitors. But you can already ride on the territory of Michon on a free electric taxi, it starts from the nearest parking lot. True, due to poor clearance, open cars ride on a limited area.

Despite not the greatest fame and popularity of the historical complex, there is a large influx of tourists here. Most excursion buses start arriving at the temples in the afternoon, respectively, in the afternoon, the reserve territory is oversaturated with sightseers moving from one building to another.

Before the entrance to the temple complex dance shows are often arranged. Beauties in national costumes depict the devs-apsaras, you can still see the dancing of the people of Champa. On the Internet you can find very contradictory reviews about the ruins of Michon in Da Nang. Some tourists admire the old temples, sculptures and other creations of the ancient Cham civilization. Plus, they note the general historical and energetic background of the city lost in the jungle. Others see in Mishon only the ruins and ruins left over from the bombing.

Nevertheless, such a unique place – a piece of ancient Asian culture and Cham civilization – is worth a visit during a holiday in Vietnam. 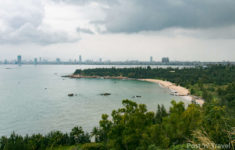 Da Nang
How to get from Nha Trang to Da Nang
Most tourists who travel to exotic countries do not plan to spend their entire vacation in a hotel room ... 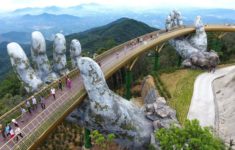 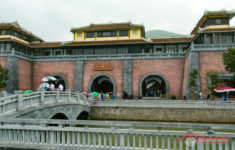 Da Nang
Ba On Hills in Danang: a French resort in the mountains of Vietnam
It is hard to believe that you can walk around a mountain for a whole day, or even stay ...
Отмена