This resort is hardly at hearing. And probably among those who have repeatedly visited Vietnam, Cape Ke Ga is not associated with a popular tourist destination. The cape and the village of the same name will not be pleased with the abundance of all the charms of a noisy and inexpensive beach holiday (for this purpose follow, for example, in Nha Trang). In Ke Ha go not for this.

Who is interested in a holiday in Ke Ga?

The place is located south of Phan Thiet, about 40 kilometers away. Ho Chi Minh City is 180 kilometers away. The place is a cape with uncrowded sandy beaches and located on the island near the lighthouse. A few hotels and shops will provide travelers with the minimum necessary infrastructure. There are practically no noisy bars, discos, bright attractions. On the contrary, they come here to take a break from the noise and be alone with themselves.

Rest in Ke Ha is perfect for couples in love, newly-made spouses in the honeymoon. Noisy companies are unlikely to be interested here, although they come here with families with children. As a rule, such companies are settled in expensive hotels, where everything is included and beyond which it is possible in principle not to go. Actually, the whole civilization is felt only within the hotel complexes. The cape will also attract wild holiday lovers who prefer to plan their holidays on their own, without attracting animators and guides. Ke Ha is clean beaches, pristine nature, clear sea and a real, non-tourist South Vietnam. In the nearby village live ordinary Vietnamese. Trusting and benevolent, they gladly make contact with tourists. Therefore, it is not superfluous to learn a little Vietnamese language.

As for the weather, it is about the same as in the rest of the south of Vietnam. The subequatorial climate allows you to relax here year-round. There is no suffocating heat, but almost every day there are short showers, which, however, do not spoil the experience. There are no strong winds and waves, the water is most comfortable in summer, and the air temperature stays between 26 and 32 ° C all year round.

Where to live here?

There is a regular bus from Ho Chi Minh City to Ke Ga. The trip takes about 6 hours – this time must be considered while planning a vacation in Ke Ha. The choice of accommodation is also to be taken seriously, because local hotels are very different in quality of service. Note the top five most popular accommodation options: Of course, the five-star Princess D’Annam Resort complex is considered to be the leader in terms of comfort. Judging by the reviews on the booking.com service, this option is leading among Russian-speaking tourists. The most significant disadvantage is its price. Therefore, it is chosen mainly by those who are going to be inside the hotel all their time, who are not particularly interested in wild beaches and fishing in the village, who want to pay back the money spent in full.

The complete opposite of this hotel is the Eco Spa Village bungalow complex.

The level of this complex is “3 stars”. It consists of individual villas and bungalows, located near the beach, in close proximity to the lighthouse – the most prominent tourist site in this area. The resort was originally designed in the form of a Vietnamese village, and according to it the reviews are not so impartial. Visitors complain that over the past few years this hotel complex has been significantly launched. The entire territory of the adjacent park is overgrown with vegetation, which is not particularly looked after. Houses that offer various wellness treatments are also not in the best condition, and have to go to breakfast in a nearby hotel. It is hoped that reviews on such major services as tripadvisor and booking.com will finally be taken into account by the owners of the hotel and the situation will begin to be corrected. However, there are those who are fond of such a semi-wild rest. After all, this is one of the cheapest options, and they come here, as mentioned above, not so much for comfort, as for solitude. The remaining hotels have 3-4 stars and, on average, satisfy the Russian-speaking tourist. Hotel Sai Gon Suoi Nhum 4 * is in good demand. It is also located near the lighthouse, as well as from the local golf club. On average, at the price of a variant of accommodation a standard double room will cost about 2,000 rubles per night. The room has everything you need: shower, toilet, refrigerator, free wireless Internet, TV. The complex also has 2 swimming pools.

It is worth considering that the Vietnamese “stars” may not coincide with the standards adopted in Europe. Most often, the “star” hotel for the quality does not reach the same European level. In this parameter, it is worthwhile to compare only local hotels.

The oldest lighthouse in Vietnam

The previously mentioned lighthouse really attracts most visitors to Cape Ke Ha, so we’ll dwell on it.

The lighthouse Ke Ha was built during the French occupation, more than 100 years ago, on the island adjoining the Cape. Its construction lasted 2 years. The highest point of the lighthouse is 64 meters high, which makes it the highest in the country. Until now, this object, whose net height is 35 meters, stands in its original form. It is noteworthy that absolutely all materials, including the electric generator and the searchlight, were transported from France. During low tide, the island connects with the coast by a narrow isthmus, and you can walk to the lighthouse. The rest of the time, the locals will kindly deliver the tourists to the island by boat. Access inside the lighthouse is free, and everyone can climb the viewing platform along a spiral steel staircase and from there admire the dawn. The length of the stairs is 183 steps.

Since the time of the French, century-old vegetation has grown on the island, and the path to the lighthouse is made of concrete by the same French builders. Despite its age, the lighthouse is still active. Its searchlight can be seen within a radius of 22 nautical miles (about 40 kilometers).

Some come to Cape Ka Ha from nearby Phan Thiet to see the lighthouse. Others come here purposefully for a few days to indulge in the solitude and contemplation of the South Vietnamese nature. Others generally spend their holidays here without leaving the territory of expensive hotels.

In a word, Cape Ke Ha is gradually becoming a popular tourist destination, despite some inconveniences that can be attributed to local authentic features. 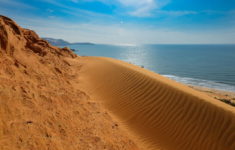 Phan Thiet & Mui Ne
White and red dunes: the grandeur of Lotos Lake in the desert
Mui Ne is a small fishing village in South Vietnam. The resort attracts tourists with a clean beach, pleasant ... 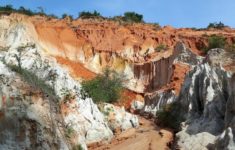 Phan Thiet & Mui Ne
Fairy Stream: the Grand Canyon in miniature or the magical power of Fairy Stream
Known for its sand dunes and the abundance of kitesurf schools, the fishing village of Mui Ne is also ...