Phu Quoc is the largest island in Vietnam. Today, tourists from all over the world come here to relax and see the local sights. One of these is the historical museum. In the past, a POW camp was located on its territory.

It is hard to imagine that only half a century ago, events occurred in Fukuoka that no one would have wished to see even in the most dreadful dream.

Located on the south side of the island in the city of An Thou. During the Indochinese War, it was the central prison camp in Vietnam and was called the Coconut Prison. 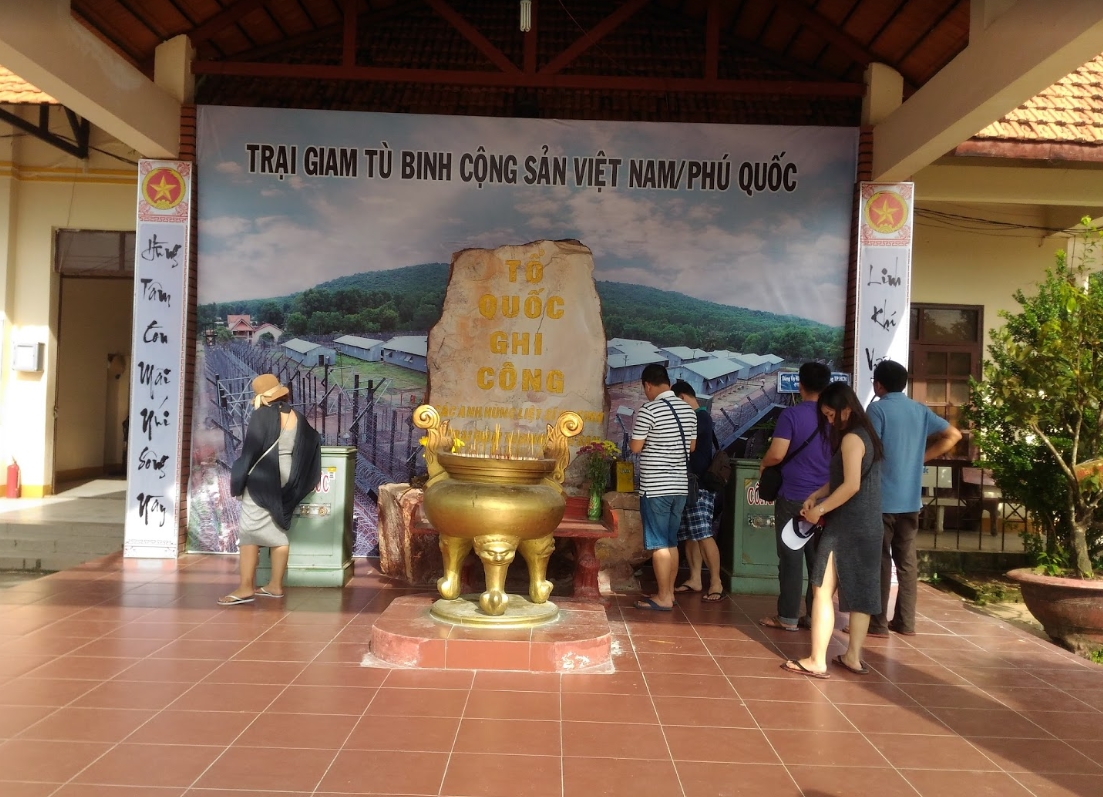 Prison Museum is waiting for its visitors

Despite the beautiful name, it is a place of torture, death and thousands of ruined souls. It has been suggested that the Coconut Prison was named because of the many palm tree plantations on which prisoners were supposed to work.

History of the prison in Phu Quoc

The prison camp was erected by the French colonialists in the years 1949-1950 – during the Indochinese War to contain the rebellious rebels. In the mid-fifties, when the French left the land of Vietnam, the prison was not closed. Criminals have been exiled here.

Later, when the second Indochina war began and the leadership of South Vietnam received support from the American troops, prisoners of war of North Vietnam began to be held in the Cocos Prison. Also here were detained high-ranking Vietnamese leaders.

With the capture of the Vietnamese territory by the French, a large part of the island of Fukuoka was allocated for the prison.

This also included the zones where prisoners who fought with the French occupiers were kept. Officially, the camp was used for about a year (from June 1953 until July 1954). 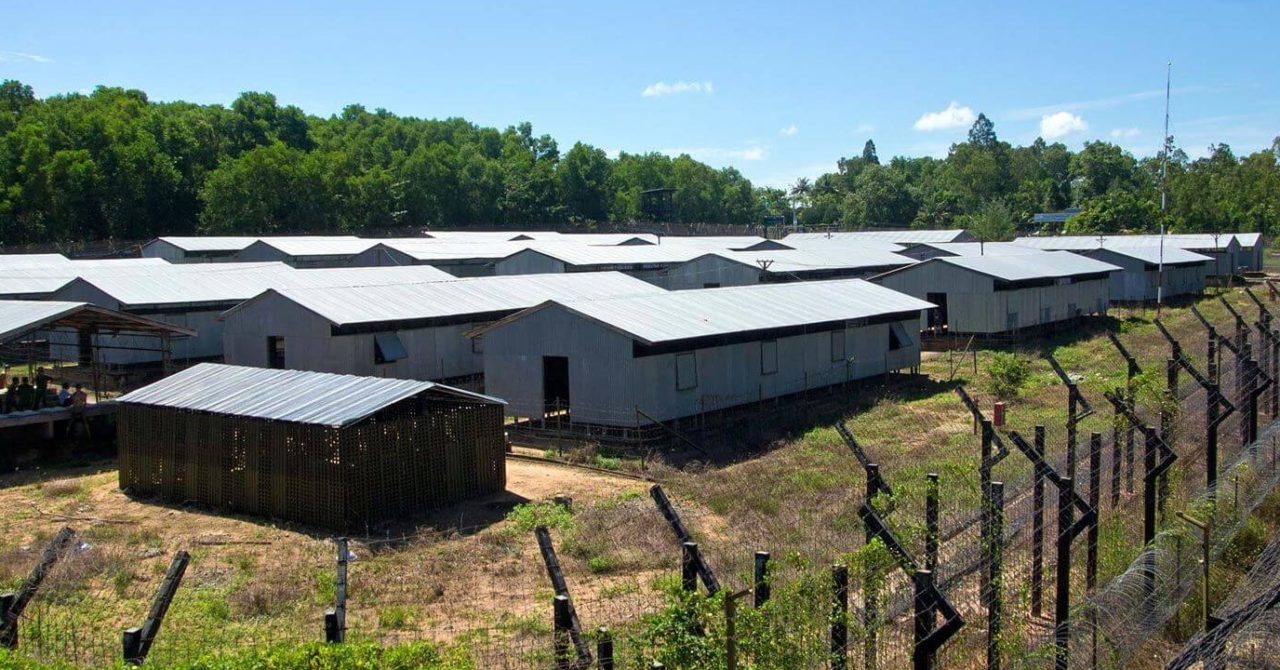 Coconut Prison Fukuoka: the purpose and tricks of construction

Until 1972, the camp consisted of 12 zones, later two more zones were built. Each of the 14 territories was divided into a large number of mini-sites, where up to 950 prisoners were supposed to be, and in total in one zone there were about 3,000 people.

For detained officers used a separate space. All 14 zones are enclosed with multi-layered barbed wire and equipped with electric light.

The prison area was guarded by armed soldiers from 4 divisions who had with them intercoms. The outer part of the camp was supervised by the Navy. It was practically impossible to escape from this hell, because, apart from safe fences, one guard was assigned to every two prisoners. On the prison area, there were from 30 to 40 thousand political prisoners.

The arrival of the French colonialists in Vietnam led to the formation of rebel movements. In 1945, the leader of the communist patriots for independence, Ho Chi Minh, declared the Republic of Vietnam an independent democratic country. All loyal subjects to their leader and fighters for justice occupied the northern part of the Vietnamese state. 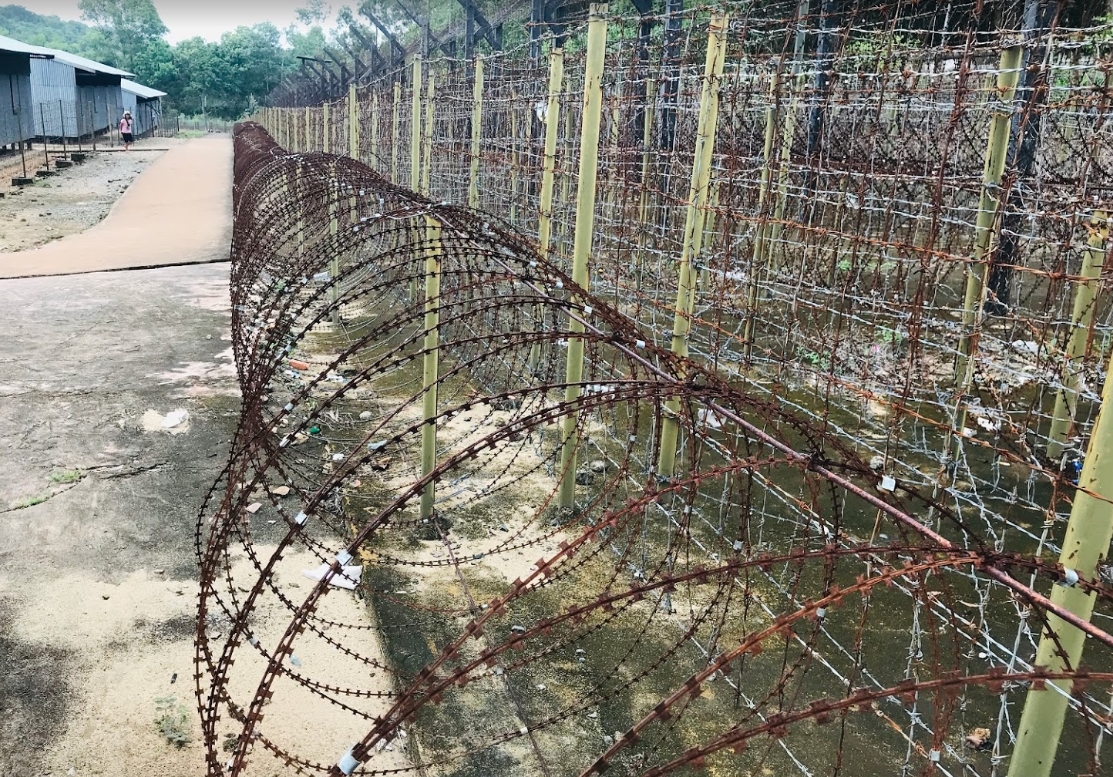 France was not going to lose the occupied territories and was located in the south of Vietnam. With the build-up of military force, where Ho Chi Minh helped China, and the French – America, both sides of the continent began to prepare for civil war.

According to the Geneva talks, a demilitarized zone was introduced into 17 parallels, which divided the state in half into South and North Vietnam. Formed two territories began to fight among themselves.

At that time, a camp for prisoners of war from the northern part of the country was built on 40 hectares. It was called the Coconut Prison.

The military events between the southern and northern areas of Vietnam turned out to be the background to the war with the United States.

Prison conditions for prisoners were particularly cruel. Among the many painful tests, people had to endure violence, which not everyone endured. A striking example was the tiger cage of barbed wire. 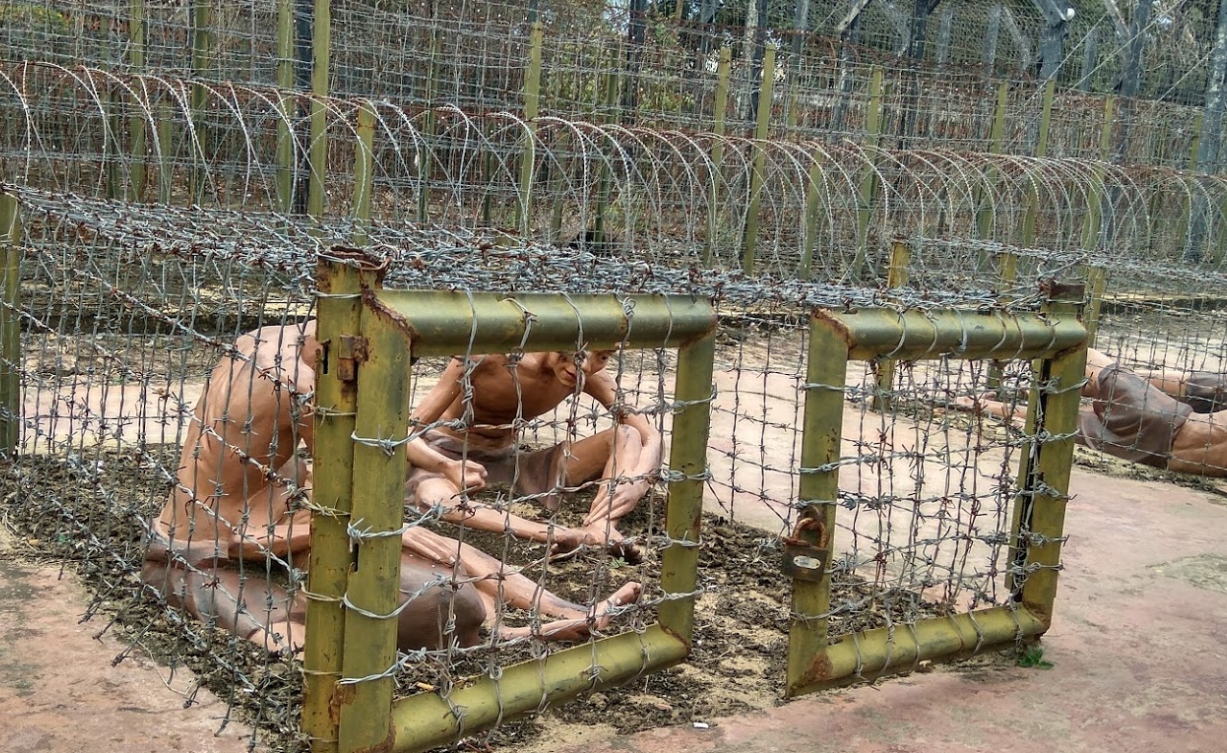 Active political prisoners were placed in it to pacify, as well as captives from other camps. Often, only underwear was left on the fighters of the communist movement. Staying in a metal prickly frame was considered one of the worst torture. The prisoners were kept here for several days and nights without drinking or eating, only occasionally giving some water and rice.

People were forced to stay in a punishment cell in the heat and cold. The size of the cells did not allow not only to straighten up to full height, but also to sit down or change the pose. Sharp spines pierced the body and tore the skin to blood. The toilet was not allowed to go, and people were forced to relieve themselves by themselves. Many did not stand such tests and died on the spot.

A kind of torture in Coconut Prison was also Katso’s cell. An iron container with no windows and slots served as a kind of insulator. To kill the will of the prisoners, they were locked up in a few people in their underwear and left for several days, giving neither water nor food.

The temperature difference reached 16-17 degrees. In the daytime, the air heated to 30-32 degrees, and at night it cooled to 15. Without being able to go out, they went to the toilet there. Being thus in the iron box, even the strongest rebels broke. 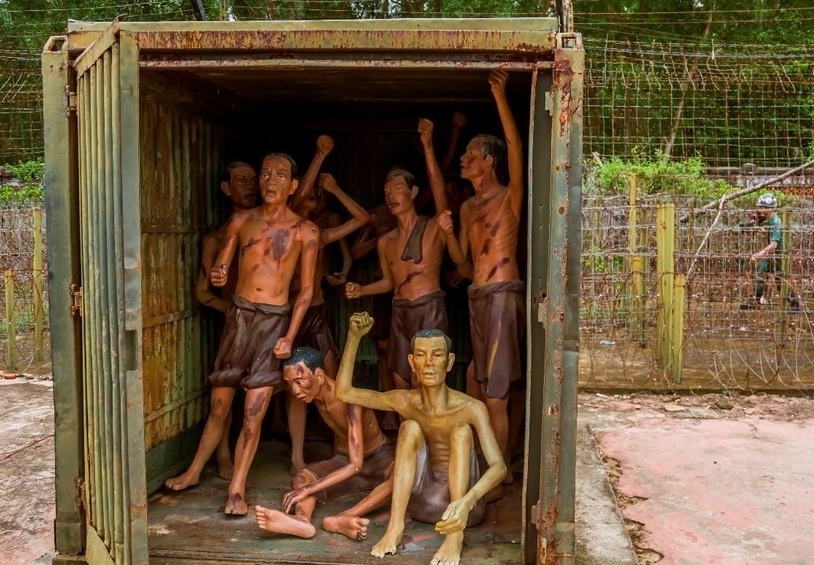 Hellish conditions and thirst for the will pushed the prisoners to escape attempts. Not all of them were successful. Of the 300 cases, about forty are considered successful. The prisoners tried to find themselves outside the campsite by any means, therefore they fled while traveling to work, during transportation.

They took away weapons from the escorts, and also carried out the digging. During the existence of Coconut Prison there are up to 7 successful shoots in the tunnels. The land was dug in tablespoons for several months. The length of the longest tunnel was about 20 meters. The underground passage led outside the prison territory.

During the detention of prisoners in the Coconut Prison, out of 40,000 prisoners of war about 4,000 people did not stand the terrible ordeal.

After the end of the Vietnam Civil War, the prisoners were released, but many, having experienced cruel, inhuman torture, were released with injuries and mental disorders.

Museum in memory of those killed in prison

Despite the many attractions and attractions of Fukuoka, every year about 10,000 tourists who come to the Vietnamese island visit the historic place – the Coconut Prison. Among them are former prisoners of war. 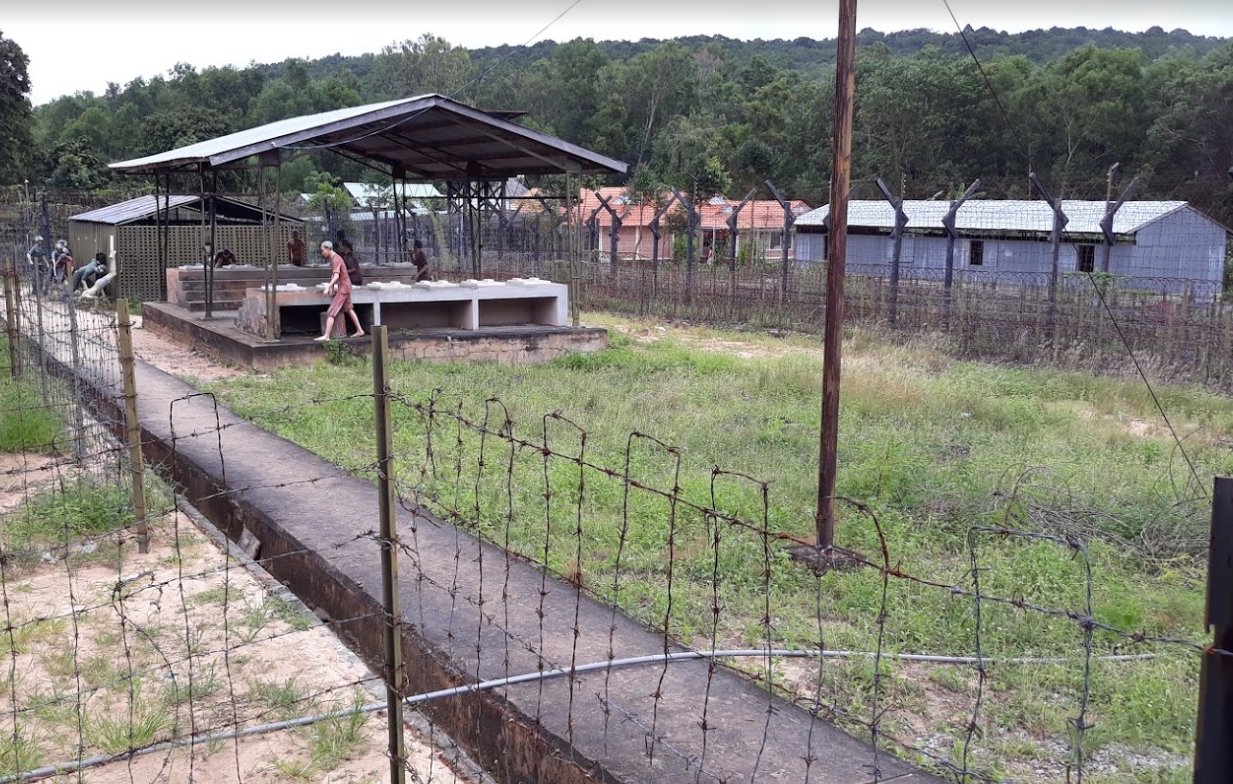 Excursions are conducted using three languages ​​- Vietnamese, English and French. Having been in the camp, it will be possible to imagine all the torment through which prisoners of war had to go, and to be convinced of the patriotism of the country’s heroes.

The former Coconut Prison was opened to visitors in 1995, when it was awarded the title of national relics. Now this is a historical place, telling about the resilience of the Communists. The monument in the shape of a hand, set in a museum, is a symbol of the enslavement of the people and the unbroken will of the patriots. During the restoration of the camp, a cemetery of deceased prisoners was left.

The completed layout of the prison provides an opportunity to present the events of past years. The size of the camp with prisoners of war resembled a whole city in which hundreds of houses replaced iron barracks. In a small structure covered with tin, up to 150 prisoners were placed, who had to sleep in piles without being able to take shelter from the cold. There was no toilet here either. Instead, a pit was dug in the center. Prisoners worked hard, were tortured and humiliated.

On the place where they found the remains of the bodies of prisoners, erected a monument. When you look around and notice a lot of barracks in the form of matchboxes, 10-15 ply barbed wire barriers, guards with dogs, become uncanny from this whole situation. Therefore, people with weak nerves and those who came on holidays with children should think about whether it is necessary to book an excursion to the territory of the Coconut Prison? 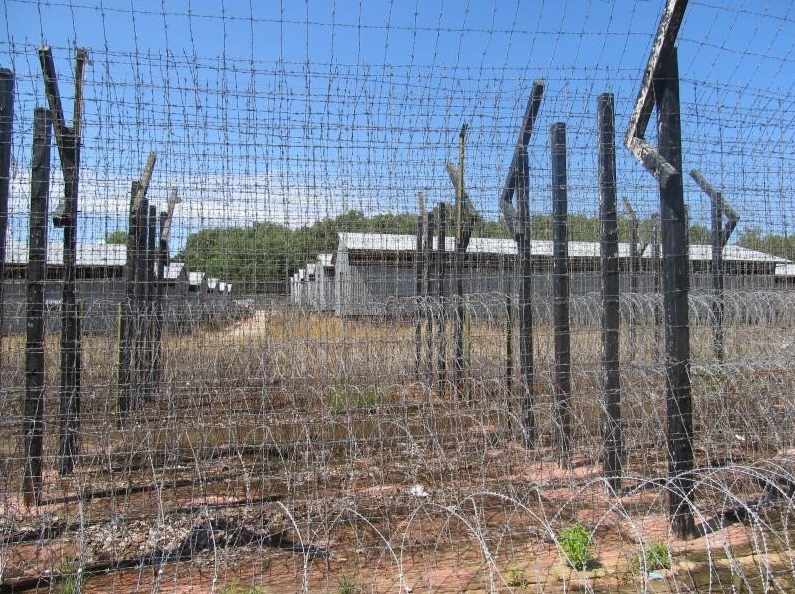 Barbed wire fence all around the prison

But those who visited these places are beginning to understand why Vietnamese residents still hate the invaders, despite the fact that in today’s world they support Americans more and accuse supporters of partisan movements. Being among the barracks, you unwittingly change your views. In the museum you can see the names of all the prisoners, their clothes, dishes, drawings and other personal items.

In 2008, the excavator driver, conducting regular work, ran into the bodies of 500 deceased prisoners.
According to local conversations, one of the prison overseers still lives quietly in Fukuoka, destroying more than one human life and conducting cruel torture of prisoners of war. Now the warden is about 80 years old. 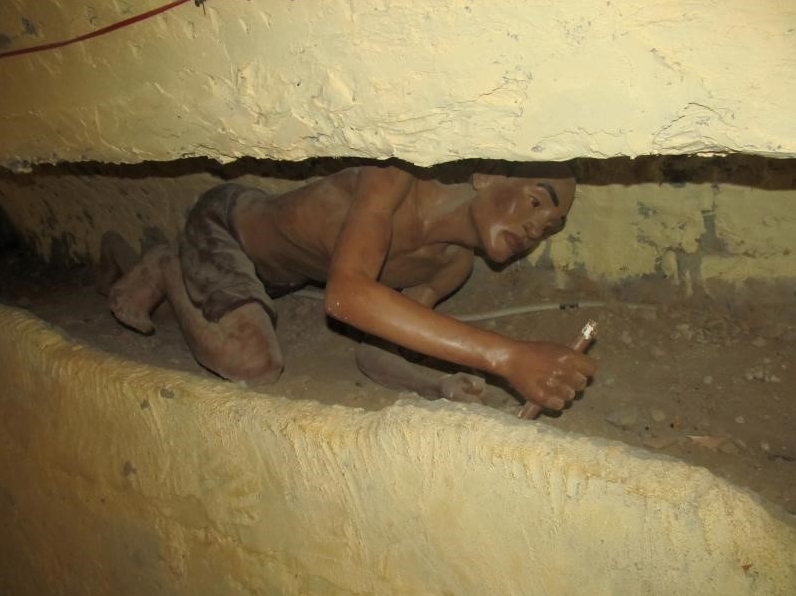 Tunnels that dug prisoners with spoons

How to get to the Coconut Prison Museum. Working hours

The main prison road to the prison museum connects the island’s airport and the port of An Hoi. If you go to the beach, “Bai Sao”, along the way you can see the former camp. It is impossible not to notice the blue monument, located on one side of the highway, and in front of him the barracks behind barbed wire.

On your own transport, you can get to the museum from Duong Dong in 45 minutes. The cost of visiting historical sites is 30,000 Dong, taking into account the tour guide, who introduces past events in one of three languages. Although, according to many tourists, they managed to get to the Coconut Prison free of charge.

You can see the famous camp of Phu Quoc Island by ordering a sightseeing tour or getting to the designated place on a bike.
The museum is open from 7-30 to 11-00 and from 13-30 to 17-00. Closed on Monday.

The events reproduced in the layouts make it possible to feel the horror that the Vietnamese patriots had to experience. Seen can not leave indifferent any of the visitors Coco Prison. And while people perceive the pain of others torment, they remain human beings. 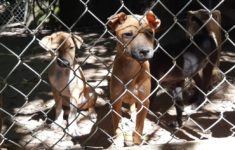 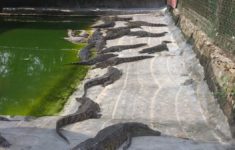 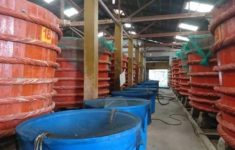