Noi Bai International Airport is the largest airport in Vietnam in terms of capacity and is located in Hanoi, which is the capital of the country. The airport is equipped with the newest technology and is a comfortable place to fly to and from. It has restaurants, sleeping pods, and lounges.

In this article, we will give a complete description of the airport and also talk about the services it offers and the hotels around it. We will also cover the airport’s history and current status. 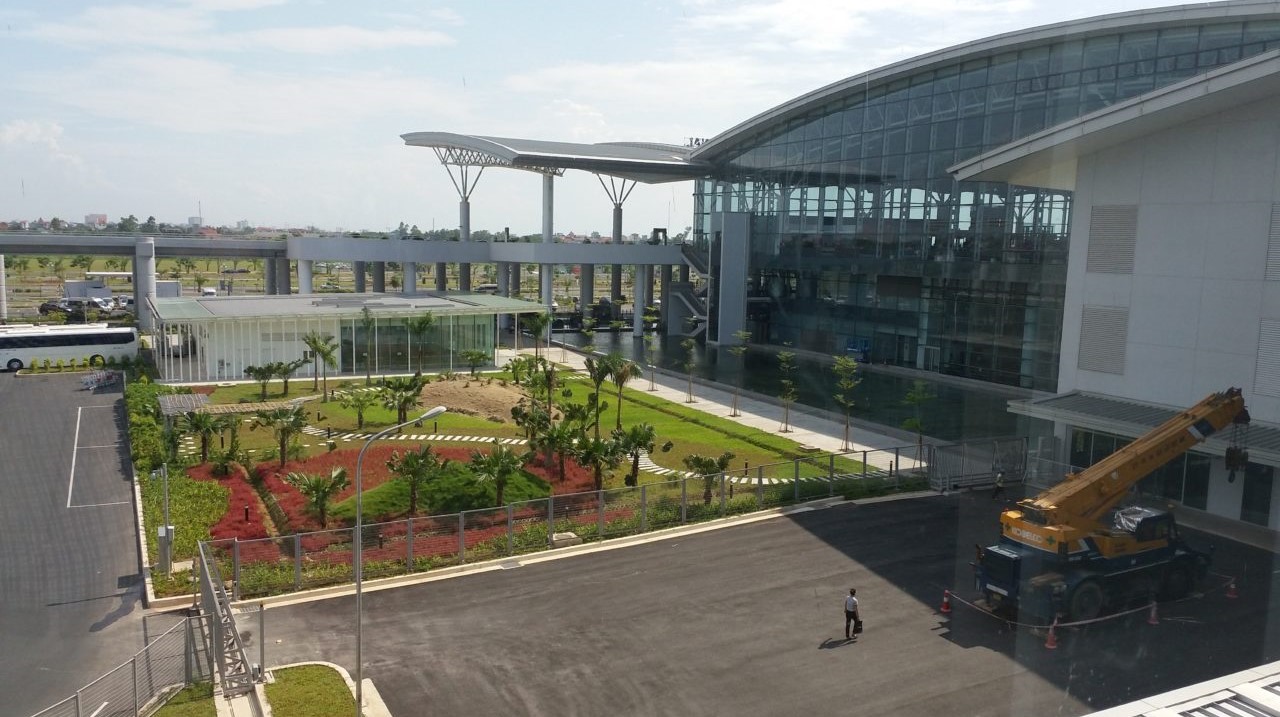 This airport is located in Hanoi, which is the capital of Vietnam. It consists of two terminals, and while the first one has existed for a long time, the second terminal has been added in 2015. The first terminal is intended for all domestic flights, and the second terminal was built to receive all the international passengers arriving and departing from Hanoi.

This airport is the main hub for many airline companies, including the flagship Vietnam Airlines and also Vietjet and Jetstar Pacific.

The airport serves many domestic customers too, and the route from Hanoi to Ho Chi Minh is the busiest route in this airport.

The Noi Bai airport serves around 28 million customers yearly, making it the second busiest in Vietnam. Over 6 million people fly yearly from Hanoi to Ho Chi Minh, making this route the sixth busiest in the world.

The airport was built as a small airbase in 1978 on January 2, and at that time, it had a very small capacity and did not have as much significance as it does now. The first terminal for domestic flights was completed in 2001 and began serving customers in that same year.

In 2005, the airport became a destination for Tiger Airways, whose planes flew three times a week. They took people from Singapore to Hanoi. Soon after, AirAsia began using this airport to take people from Hanoi to Kuala Lumpur and Bangkok.

With an area of 650 hectares, this airport is slightly smaller in area than the 800-hectare Tan Son Nhat airport. The airport has won numerous awards for being the most improved in the country and serving many visitors.

The first terminal of this airport is intended only for domestic flights inside the country, while the second terminal serves all the international flights.

This terminal is a long building with two branches. The building has four levels, and it alone serves both arrivals and departures. All the services and lounges are also based in this large building.

The four floors all have different functions, and while the first floor serves arrivals, the second floor is for departures. The third floor is where all the offices are located, and the fourth floor is entirely designed for restaurants and cafes.

The building is designed to be top-notch, so all the comforts are present. There are a few restaurants inside the airport building, and all of them are located on the fourth floor.

There are a few shops with various goods in the terminal building. These shops are duty-free.

Another service is car parking. Transport services are also present, and you can rent a car near the airport in order to quickly get around the city.

There are also ATM machines and cash exchange stalls, where you can exchange VND for your currency.

For small children, there is a special play area where they can stay temporarily while their parents organize a trip.

The area also has internet access and chargers for mobile phones. The attendants at the information desks are ready to help anytime.

Vietnam Airlines Business Class Lounge. This one is located in the Domestic terminal and is active from 4 am to 10 pm. The lounge offers free internet access and has a bar and a food stall. You also have access to TV.

Song Hong Premium Lounge. This is also a Domestic-only lounge, and it has food, beverages, a sitting area, and wireless internet access.

There are also sleeping places in the second terminal, and even though they are not intended for taking a long sleep, they work just great for a tired traveler to take a short nap.

This terminal is for doing international trips, and it has 22 international airlines going to and from it. Some of the largest are Vietnam Airlines, Cathay, Lao, and Tiger.

This terminal is also a four-story building, and the arrivals area located on the first floor. The second floor is for immigration offices, and the third is for departures. The top floor is for the lounges and the representative’s office.

The second terminal has ten counters for check-in in the hall. There are four check-in islands, with 24 windows each in the other part of the building.

The second terminal has much better VIP services than the first one, and it is aimed at giving you a great impression of the airport. A few elite restaurants operate here, and people are advised to visit them to have a taste of the Hong Kong cuisine that is offered here.

The second terminal is also the only one that has places to sleep.

The locker room is where you can temporarily leave luggage. It is in the East Wing of the building.

The playground near the 33rd gate is intended for children of parents who are traveling through the airport. It has many swings, slides, and a place to change diapers.

International passengers that fly into Vietnam must first of all show which countries they have visited. If the administrator decides they pose a hazard, then the new arrival must spend two weeks in quarantine to make sure they have no infectious diseases like COVID. The same goes for people who have a fever.

After the quarantine is over, the baggage is reviewed, and if necessary, the customs officer will look at it to evaluate its price and make a list. After that, you are led to the arrival hall where you get all your baggage back and can proceed outside.

The Visa must be processed before the immigration unless you are from a country that has Visa-free access to Vietnam.

As Hanoi airport is supposed to be top-notch, it is equipped with a lot of comforts, and one of the best ones is the VATC sleep pod. There are many of these small rooms in the airport, where tired visitors can take a short nap while waiting for their plane.

This hotel is located 500 meters from the airport, and that makes it the closest hotel – you can easily walk to it, which is what most visitors do. The hotel is eligible for 8 out of 10 stars by customer reviews, which makes it a very good one.

There are many rooms in this hotel, and all have free Internet access, and the building is equipped with a restaurant.

The AirPort View hotel is only 45 minutes drive from Hanoi.

In 2015, this hotel was fully rebuilt and went through remodeling. All the rooms have wooden floors, large windows and free cable television.

You can order both drinks and food to be brought straight to your room in the hotel. You can also order a wide variety of other services, like having the attendants iron your clothes. There is an excursions bureau that will help you get a detailed tour of the hotel.

The restaurant serves Vietnamese cuisine from 6 in the morning to 10 pm in the evening.

The hotel is also very good, and it has a rating of 8.2. This is a great rating, and the hotel has many rooms, with free internet access, and each has its own bathroom with a bathtub.

The hotel is 3 kilometers from the airport and is the second closest one. It is interesting because it is near many historical places, and it is also 15 minutes away from Me Linh Plaza.

All rooms have flat-screen televisions with all channels enabled. There are also safes in all the rooms for your luggage and a minibar.

The hotel has ATM machines and a currency exchange stall. As in the previous hotel, there is a bureau for consultation and tours.

All the rooms have air conditioning.

Visitors may order dishes from the restaurant without renting a room.

Hải Cảng Restaurant, which is located on the fourth floor, is a good place to eat and drink while you are at the airport. It mostly serves Hong Kong cuisine,  which is prepared by chefs from that area.

That restaurant offers seabed discs, sour soups with seafood and asparagus soup. The restaurant is surprising for the high quality of food it offers.

The second floor is interesting for having the Confetti restaurant, which is posed as an ideal choice for group travelers or couples that arrive in Hanoi. The restaurant is in the second International Terminal.

And next, there is a large multitude of smaller fast-food restaurants like Burger King and the like, where you can quickly get affordable food. However, if you want to sample real Vietnamese cuisine, you should visit one of the two restaurants we have named above.

Airport Location, how to get in and out?

The airport is located on the outskirts of the city, and we will name the routes for getting to the center of the city from the airport.

The buses with numbers 7 and 17 drive regularly to Hanoi’s center and back to the airport. They arrive every 20 minutes, and it only costs 5000 VND to buy a seat in one of these buses. The buses keep running from 5 am to 10 pm.

Taxis of any brand will take you from the airport to the nearby city, and it will cost you around 320,000 VND for the trip to the center of Hanoi. The trip will take 30 minutes on average.

Both terminals have their own garage where you can park your car. The first hour of parking costs a small fee, and then you will be charged a smaller fee for each successive half-hour.

There are many companies that offer car rental in this city, and you may rent a car any day for any time in order to get to the airport. This is the most expensive way to get to the city but also the most personalized.

Noi Bai is, in almost all respects, the biggest airport in Vietnam. It is also located in the capital city of Vietnam, the largest city by population. You may expect excellent conditions there on arrival – it is very comfortable and is located near many notable tourist attractions.

We advise using this airport for traveling to Vietnam, especially if you have enough money to afford the VIP accommodation in the second terminal.