Everyday clothing plays a significant role in the lives of Vietnamese, and they convey special importance to traditional costumes. The Vietnamese people have a very ancient and highly diverse culture enriched by other ethnic groups, so they have lots of costume varieties at their disposal. The costumes are authentic, unique, and have a large-scale cultural value. The most common and in-demand dress is Áo Dài. Ao Dai is so charming and figurative that it has become the subject of study for many modern fashion designers. I suggest we find out why this dress gained so much respect.

History of the Traditional Vietnamese Costume 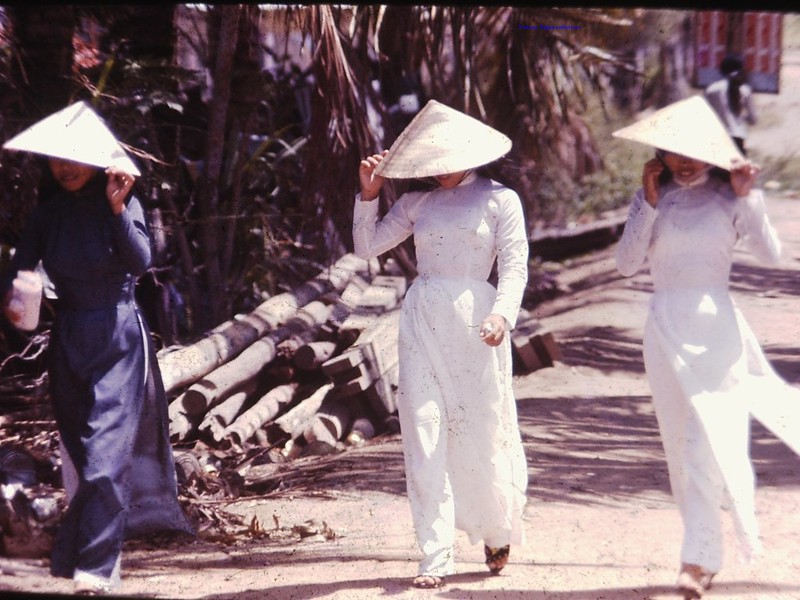 Ao Dai is known to be a national Vietnamese women’s costume, representing a long dress with two cuts, frequently worn with pants. It is generally believed that the history of the Ao Dai began in 1744. As some sources suggest, the King Wu Viong Nguyen Fuk Hoat, while fighting with Chinese cultural influence, invented this national Vietnamese costume consisting of a dress with four laps, including trousers (in those times, it was common to wear skirts in Vietnam). Other sources claim the King did so in order to “overcome the lack of uniformity in clothing in different parts of the country after the conflict of feudal governors.”

In the early 19th century, Ao Dai came to have the fifth lap. The four main Ao Dai laps symbolize the parents of a married couple, and the fifth — the one who wears it. The five buttons symbolize the five elements of raising humanity according to Confucian philosophy: Kindness, courtesy, nobility, intellect and devotion. The buttons also signify the five planets of the Solar system known at that time: Mercury, Venus, Mars, Jupiter and Saturn.

How is Áo Dài Made: Parts of the Garment and Materials Used 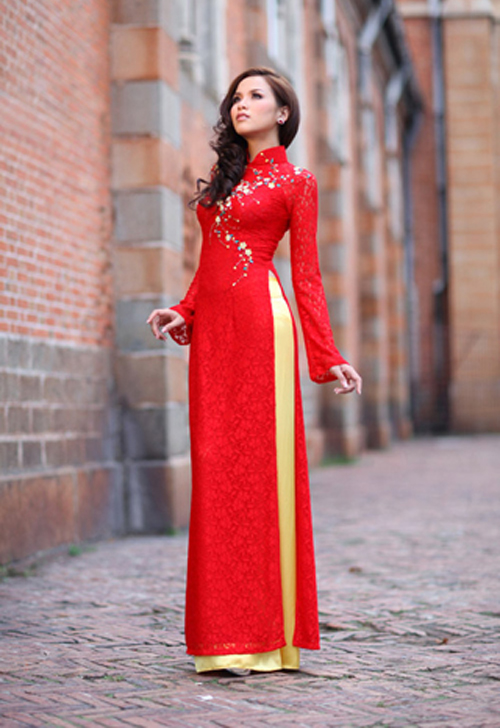 It should be noted that the depth of the cut depends on the part of Vietnam in which the Ao Dai was sewn and on the age of its owner. Women in central Vietnam wear a silk Ao Dai with a small incision a few inches below the waist, and in the south, several centimeters higher than the belt. Besides, in southern Vietnam, the Ao Dai with an open collar appeared earlier than in other parts of the country. Nowadays, Ao Dai is performed with different collars and in a multitude of coloring. Ao Dai is not meant for buying, it is usually made to order, according to the figure because the upper part of the dress must be adjacent to the body, emphasizing the waist.

In the beginning of the 20th century, alongside a change of the economy, there was a new approach to the choice of fabrics and the style of women’s clothing. Vietnamese women recognized a huge amount of colored fabrics that replaced black and traditionally dark materials. A real revolution in the history of Ao Dai was performed by a number of innovations introduced in 1934 on account of the Western cultural influence. The creation of the beautiful dress “Ao Dai” requires a careful choice of the model, color, type of fabric and tracery.

However, the most important factor that has made Ao Dai popular is the dress-skirts, making women’s gait easy and graceful. The tailor has to measure and cut out the fabric with great care so that the weft and the base are at right angles. The needle should be inserted vertically and stitched in a straight line, so the seam would be direct and form a thin stripe. In the past, all the steps of Ao Dai sewing were performed manually, so a small number of dresses could be produced in a day. However, currently, with the help of sewing machines, it is possible to make about forty dresses a day to satisfy the requirements of customers.

Are Áo Dài Worn By Men? 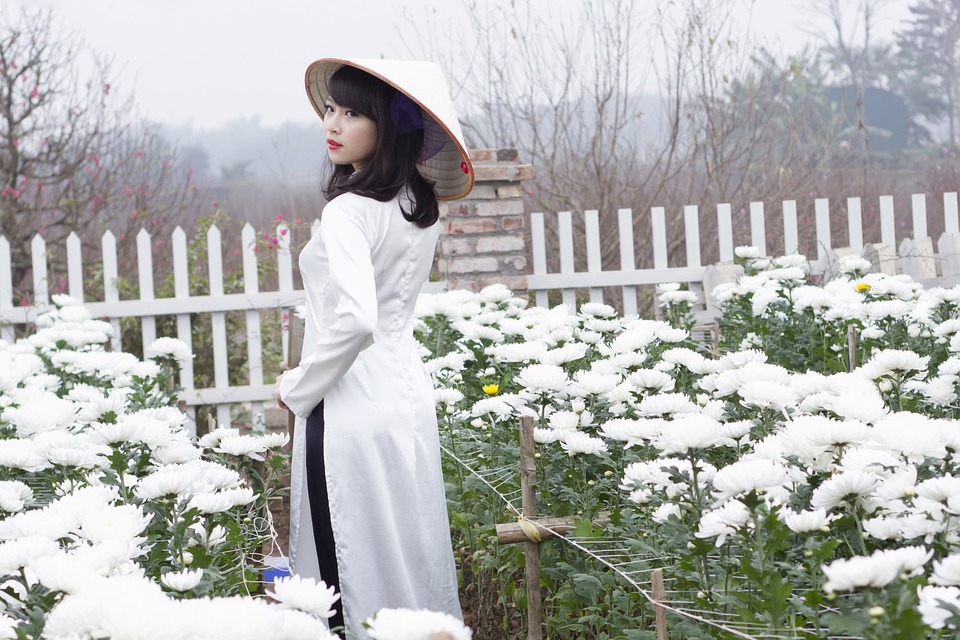 White Ao Dai Emphasizes the Innocence of a Young Lady

Today, Ao Dai is predominantly a female national garment, although it was also worn by men in previous times. Now a man can wear Ao Dai only on some solemn occasion. For example, politicians wear it during official receptions, and bridegrooms put it on before a wedding photo-session. For men, the Ao Dai is cut in a straight line, and the material is much denser. The men’s dress slightly differs from  the women’s dress and is more ritual by nature.

Men usually wear the “Khandong Ao Dai” costume — Ao Dai dress complete with the Khandong, a special headgear in the form of tape, wrapped around the head on the forehead and back of the head. When the country first hosted the APEC summit, its participants were presented with sets of national costume Ao Dai, consisting of silk trousers and a dress in a male version — a long shirt. Ao Dai then was fancied by all the leaders, and they took the costumes to commemorate Vietnam.

Where Can I Buy Áo Dài? 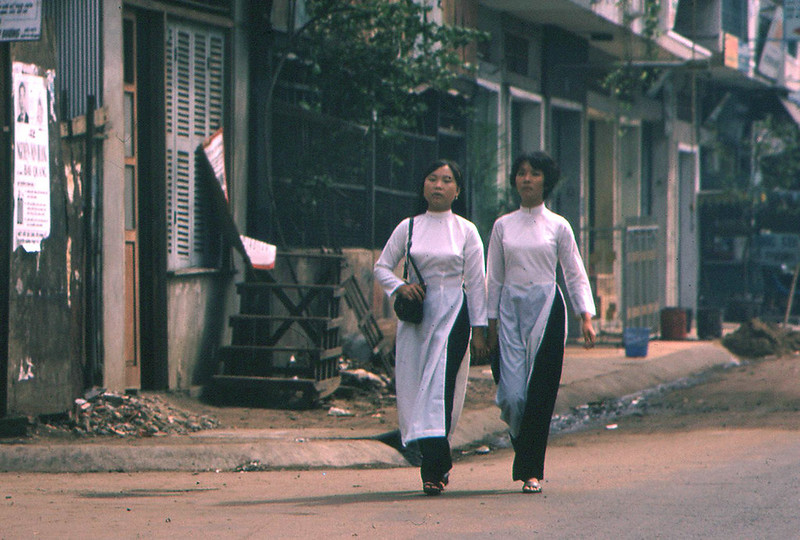 n a trip to Vietnam, it is rather inspiring to try a new lifestyle. For example, buy traditional clothes to have fun at the festival or bring home as an unusual souvenir. Vietnamese costume Ao Dai can be bought in local shops or ordered in a sewing workshop, for instance, in Hoyan. The second method is more preferable, as in that case, the dress will fit perfectly, making the figure look slender and will not constrain the movement. Due to many features of the figure and the difference in parameters, each Ao Dai dress is made individually for a specific client. Its creation cannot be set on the flow-production on an industrial scale. With the slightest change of the figure, you have to make a new one because it is impossible to alter or repair the Ao Dai.

In Hanoi, set off for the Hang Da market or Hang Gai the “Silk Street” and choose a ready-made Ao Dai. I recommend you visit the tailor’s house where the same attire will be sewn by measure. In smaller towns, you will find a tailor without leaving the tourist neighborhood. The art of sewing is mostly enhanced in Hoyan. In order not to wander among dozens of workshops, drop into “Yaly” or “A Dong Silk”: these dressmaking ateliers are particularly valued by foreigners and locals. When the order is ready, it will be delivered right to the hotel.

How much are Áo Dài in Vietnam?

Vietnam is now the world’s second-largest manufacturer and exporter of clothing. The main clothing markets are the United States, Europe, and Japan, the world’s most powerful economies. It is also worth considering that because of the low standard of living of the population, the labor force here is very cheap, and many eminent clothing manufacturers are opening their factories here. Due to this, the market deliveries go with a minimum mark-up, and the choice of clothing is overwhelming.

In addition to global brands, there are productions focused on the domestic Vietnam market, and considering the low incomes, the prices are kept at a minimum. Among tourists, Ao Dai women’s dresses made of natural silk are more than just popular clothes. The price of a silk dress starts from 500,000 dongs, depending on the models. That’s about $30 or more. A magnificent wedding Ao Dai will cost at least $100. As you can see the prices are quite affordable.

When to wear Áo Dài?

Today, Ao Dai is rather a festive garment, which is worn on special occasions, holidays, and ceremonial events. Moreover, Ao Dai is a uniform in many companies where employees work directly with people. Saleswomen, waitresses, bank and hotel workers, even flight attendants, meet customers in traditional Vietnamese costumes. Young girls wear white Ao Dai without jewelry, symbolizing their purity.

On the New Year holidays, the bright dresses are usually worn. During memorials or traditional ceremonies, women often choose brown, purple, blue-purple, coffee-milk dresses with patterns. In rainy weather, they wear dark dresses, and in sunny — light with transparent patterns.

Vietnamese women put on Ao Dai for conventional events, New Year’s Eve, or weddings. For such cases, they typically choose a red dress, symbolizing happiness and prosperity: sewn with luxurious silk and cotton veils, usually decorated with embroidery or painting in the form of landscapes, flowers, or birds.

Where to Buy Áo Dài online?

Buying a Vietnamese dress on the Internet is not that easy. The fact is that this type of product, especially Ao Dai, is not meant for mass production; therefore, you have to check dozens of online stores. It is also important that the size of the dress must fit your body measurements, and it’s hard to guess without trying on. But you can find it anyway. The recommendation of experts in this field is to contact Lazada, as it’s considered the best Asian online e-commerce platform. Another proven source is AliExpress. It offers a huge range of Vietnamese dresses and Ao Dai is no exception. There is also such an option as Shopee — an online store on mobile devices, which is highly favored in Singapore, Philippines, Malaysia, Indonesia, Vietnam. Using the services of one of them, you will surely pick up a perfect Ao Dai.

Every self-respecting woman must have a few Ao Dai in her arsenal, usually, a 50-year-old woman has about ten of them. Wearing such exquisite clothing is not an easy process because Ao Dai is clamped with a lot of tiny buttons, and any sharp or awkward movement can entail an incident in the form of a completely untied dress. The sidecut on the Ao Dai dress depends on the region, age, and has also changed over the course of the country’s history. Women of the central region of Vietnam have a low incision, usually a few centimeters below the waist, whereas southerners perform several centimeters higher than the belt. The Ao Dai dress firmly gained its place in the public life of Vietnam, became a part of poetry and literature, painting and music, and a symbol of Vietnamese culture, demonstrated to the international community.

Other
Best Travel Camera Backpack: How to Choose One?
A camera backpack is a must-have for both professional photographers and general photographers too. For example, if you are ...

Other
The Best Festivals in Vietnam
Vietnam is an exotic country with Asian flair and hospitality. It is located on the coast of the South ...
Отмена