Public Buses in Nha Trang – Getting Around

Nha Trang is a comparatively small town and it’s possible to get to most of its tourist attractions on foot, but for getting to such shopping malls as BigC, Metro or Coop Mart it would be wiser and easier to take a bus, which will be much cheaper than a taxi.

For newcomers, the bus commuting system seems rather confusing and not easily understandable.

Buses in Nha Trang are different in colors and some routes practically double one another. And, what may seem strange, they start to work very early – at about 5.00 a.m. and finish work also early – at 6 or 7 p.m.

Many of the bus routes go past tourist attractions, so it’s really easy to get to any of them. You can use buses as many times as you want – the price of a ride is only about 30 cents.

The ticket price for any bus within the town borders is the same – 7.000 dongs. All the buses are equipped with conditioners and some background music is on. It may seem rather cool in the compartment if you are not used to it.

Getting beyond the town makes the price higher.

A piece of advice. Tell the bus conductor your stop or the place of your interest and you’ll be advised on when to get off.

There are two ways of paying for a ride:

The price of a monthly ticket depends on the number of routes you are going to use it for and on their mileage. The route number where it’s valid is mentioned on the ticket so you won’t be able to use it elsewhere.

If you get on a bus by mistake, the conductor may take pity on you and let you go free until the next stop so that you could change for the right route. But more often it doesn’t happen and you have to pay.

Commuter documents often have discounts so they are more popular with students than with local people and tourists.

The compartments are equipped with cameras so it’s not possible to go without buying a ticket.

A piece of advice: always check your change. The business-like and tricky conductors can count for their profit. Tickets always have the price on them.

There are two kinds of stops in Nha Trang – one that we are used to with a shed and a bench, and the other that is only marked with a bus stop sign. Quite often, if nobody’s going to get off, a bus goes past a bus stop without stopping. To get on a bus you have to raise your hand the same way you’d stop a taxi, and you’d better do it 50 meters before the stop, giving the driver enough time to react.

There are places where buses have to stop. It’s easy to find them by blue and yellow signs. On the signs, you’ll see the route numbers and their destinations. But even there, if no passengers are going to get off, the driver may miss the stop. So raise your hand, just in case.

Traditionally, the Vietnamese get on a bus through the front door and get off through the back one.

The public transport in Vietnam is practically never overcrowded, so it won’t be hard to either get on or off a bus.

The buses go regularly, keeping to the schedule. The intervals depend on the route and are from 10 to 20 minutes. Arrival times to a stop are listed on the board near it. The bases are almost never late.

During the siesta time from 12.00 till 14.00 bases may go more seldom as the drivers have dinner.

Briefly About the Routes

We’ve prepared a chart of the main bus routes on the map. To select a route, click on the menu icon in the upper left corner of the map.

Altogether there are 6 bus routes, 3 coach routes, and 18 municipal routes in Nha Trang. They connect all parts of the town, and it’s possible to get anywhere by them. A chart of the routes can be found on every bus or at every bus stop.

However, you should be careful if you want №1, 2, or 3. You should also take notice of the color of the strip on a bus – white or yellow.

Notice: the municipal town buses in Nha Trang only have a white strip on them.

The intercity routes are the same buses but with a yellow strip. You won’t be let on such buses with an ordinary monthly ticket. It brings some confusion as the route numbers are the same but the routes are different, though the Vietnamese are used to it. Buses with different strip colors have absolutely different destinations so be careful. The distance between the start and end town stops is from 10 to 20 kilometers.

The route starts in a non-tourist place – at the southern part of the town, then it goes past the old airport, past the Long Song pagoda and further past the Lotte Mart, BigC, and Metro shopping centers, then it goes to the faraway Dien Khanh district. The route №1 is convenient for tourists as it’s possible to get by it to big shopping centers and shops. The length of the route is 18 kilometers and it has 22 stops. It starts work at 5.30 a.m. and the last bus goes at 6.30 p.m. The interval between buses is 15 minutes. One of the stops is at the large food supermarket CoopMart and there’s also a shopping center on the route. 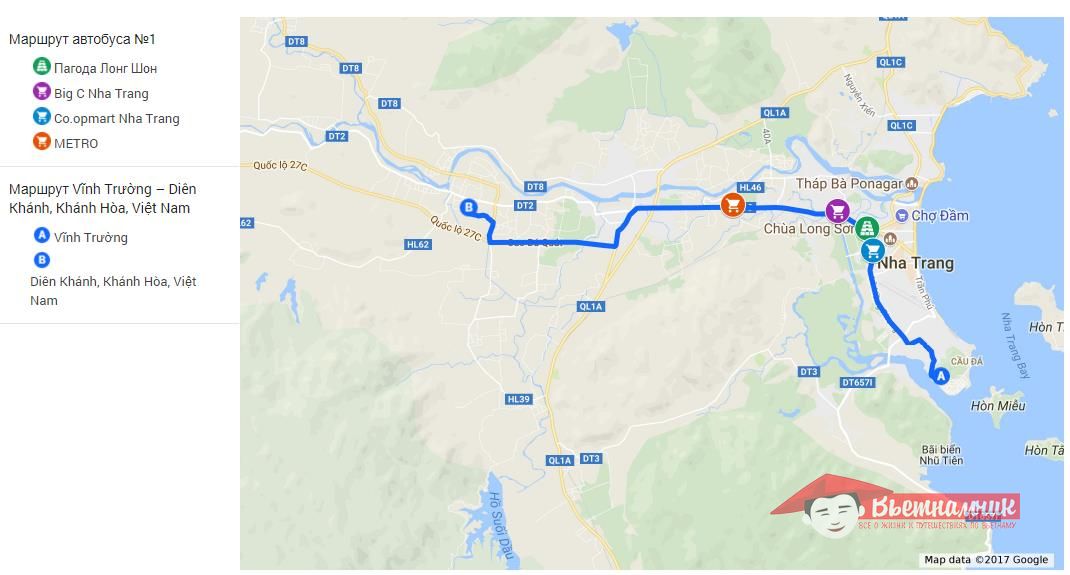 The №2 starts in the southern part of the town. A part of the route goes along the embankment then it turns to the European block and follows the second line to the center. On the way back, now moving along the third line, it goes to the central square Cho Dam (all the routes cross there). After that it goes to Long Son and then, in parallel to the first route, it heads to the end stop. On its way, the bus goes past several hotels, a nightclub, the main town hospital, the southern bus terminal, and several shopping centers. All of them are marked on the map of the bus routes in Nha Trang. The length of the route is 25 kilometers and it has 25 stops. 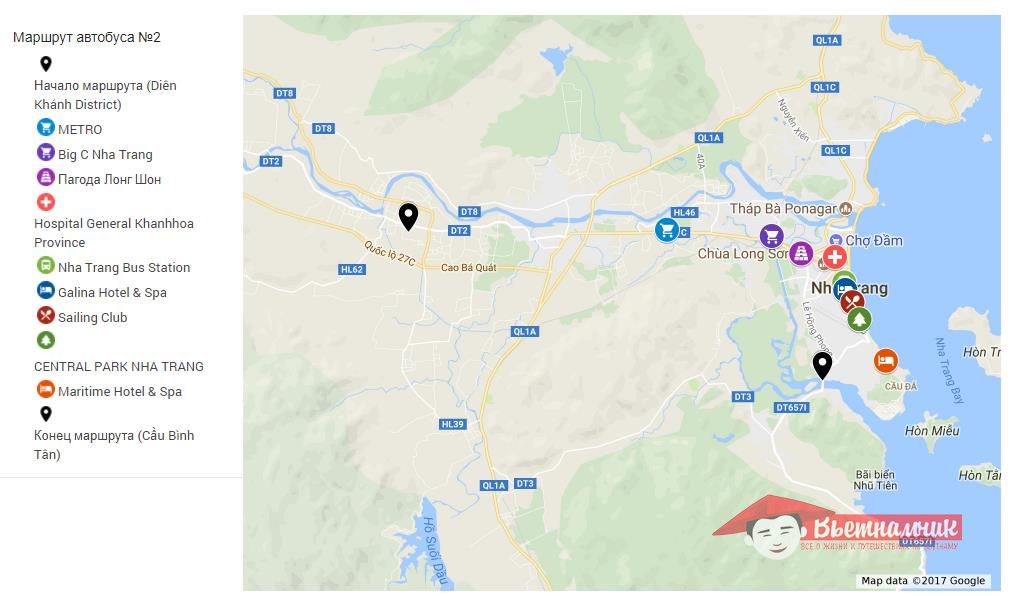 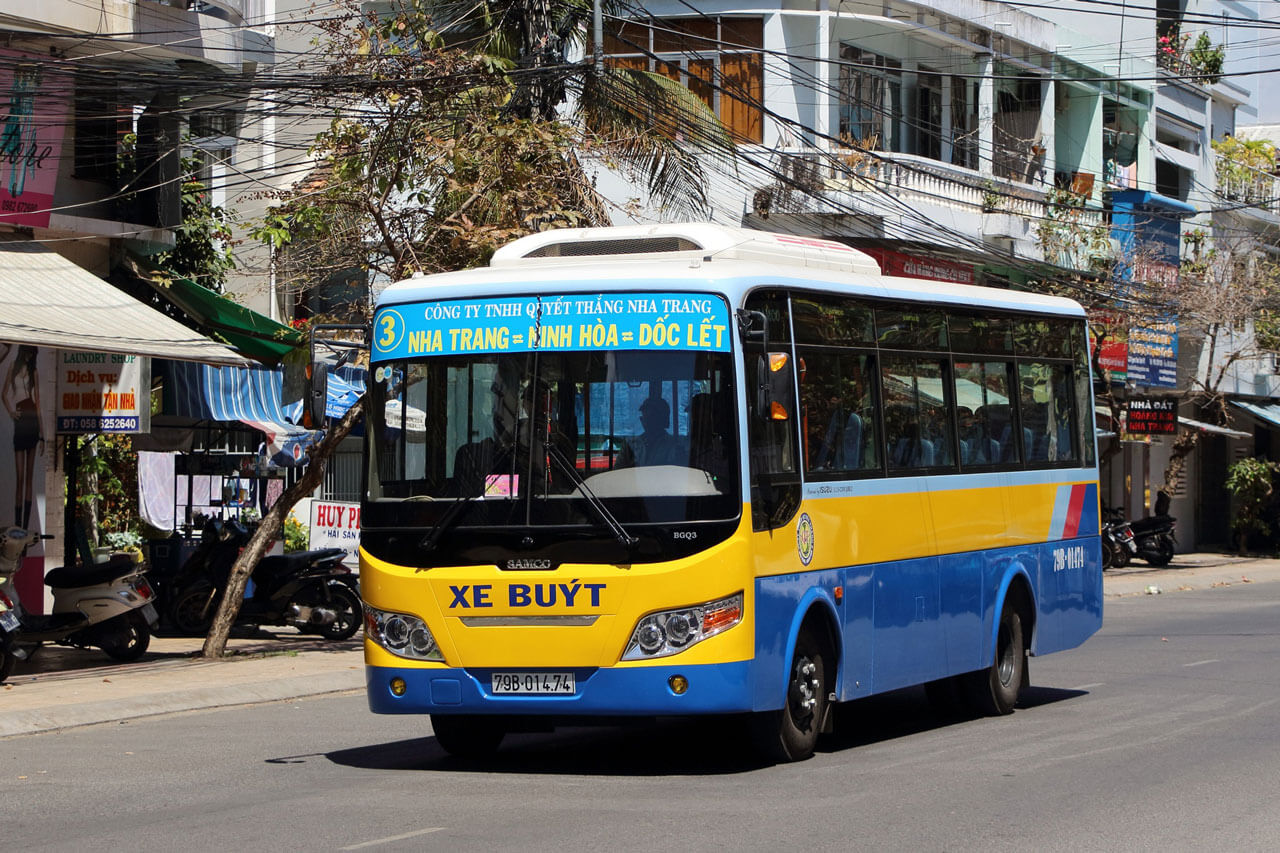 The bus #3 to the Doc Let beach

The bus №3 in Nha Trang has quite a long route of more than 50 kilometers. It goes from the town’s center to the country, to the Doc Let beach. Besides the fact that the beach is very comfortable, the salt fields are situated not far from it, so you can see how the Vietnamese obtain salt in those fields. The bus №2 with a yellow strip goes there. The #2 with a white strip operates within the town limits having the same route. To tell which of them can help you to get to the beach, it’s enough just to have a look at the front screen – it should have the “Doc Let” mentioned. It’s the most practical and inexpensive way to get there.

The route begins not far from the old airport, goes past Cham Towers and further to the North, through the Stone garden Hon Chong. 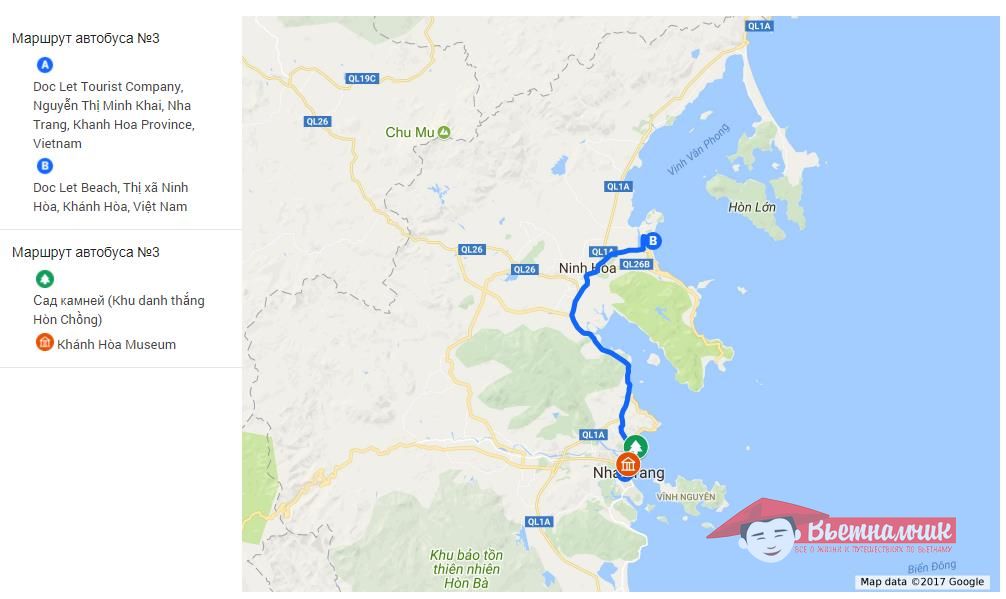 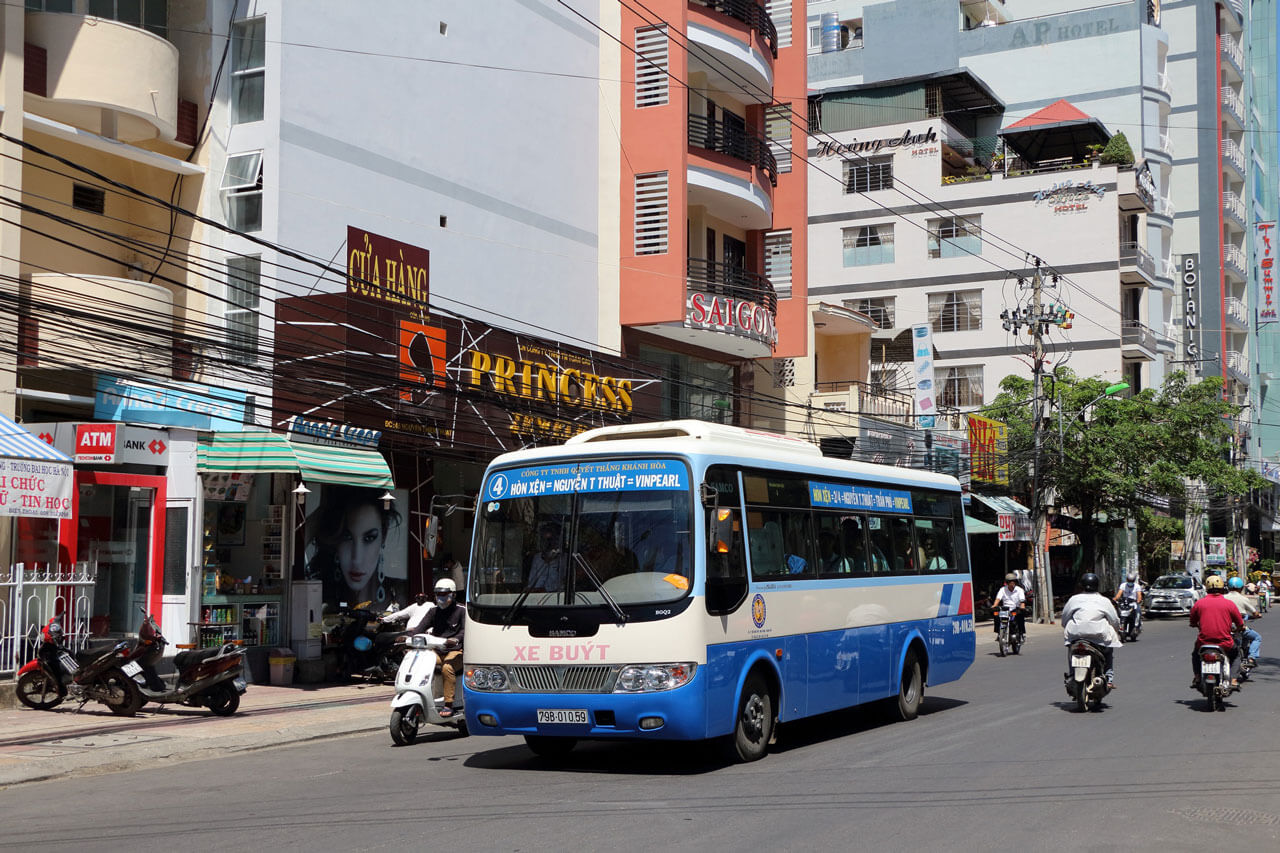 The route №4 in Nha Trang is the most popular among tourists route. It starts in the northern part of the town, goes past the Cham Towers and the mud spas, and then it goes along the embankment past the most interesting tourist attractions. The route ends near the cable way, leading to the Vinpearl Island. The length of the route is 13 km and it has 24 stops altogether. 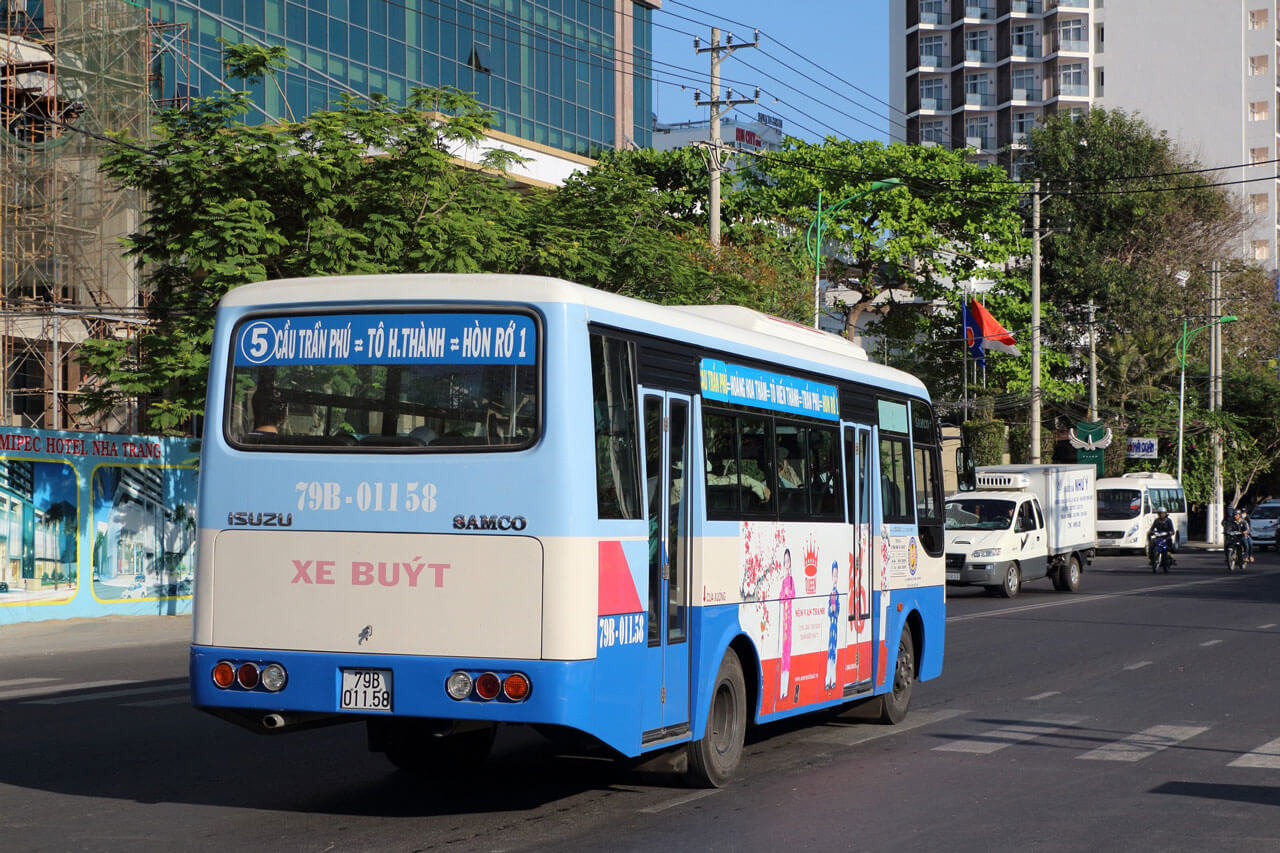 The №5 bus goes from the northern bridge, through the center to the big southern bridge. It goes past the Po Nagar Tower, past the Stone garden and the mud therapy hospital. 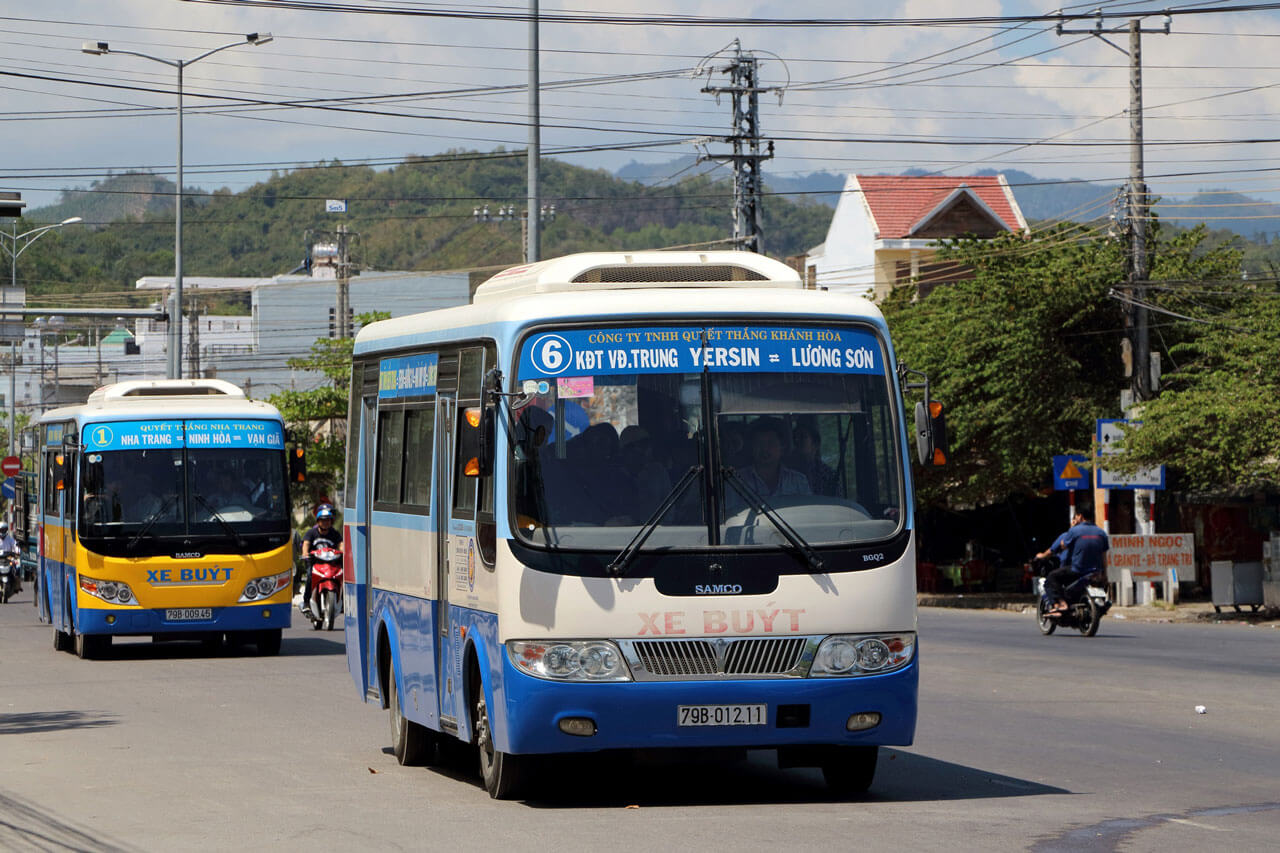 This route is short and very convenient for tourists as it goes past lots of attractions. It goes from the northern market to the “Big C” shopping center.

The longest one – about 30 km from the town center to the Cam Ranh Airport. You’ll have to pay some 30 – 50 thousand dongs for a ride. It takes the bus 50 – 60 minutes to get from Nha Trang to the airport. The interval is 40 minutes. 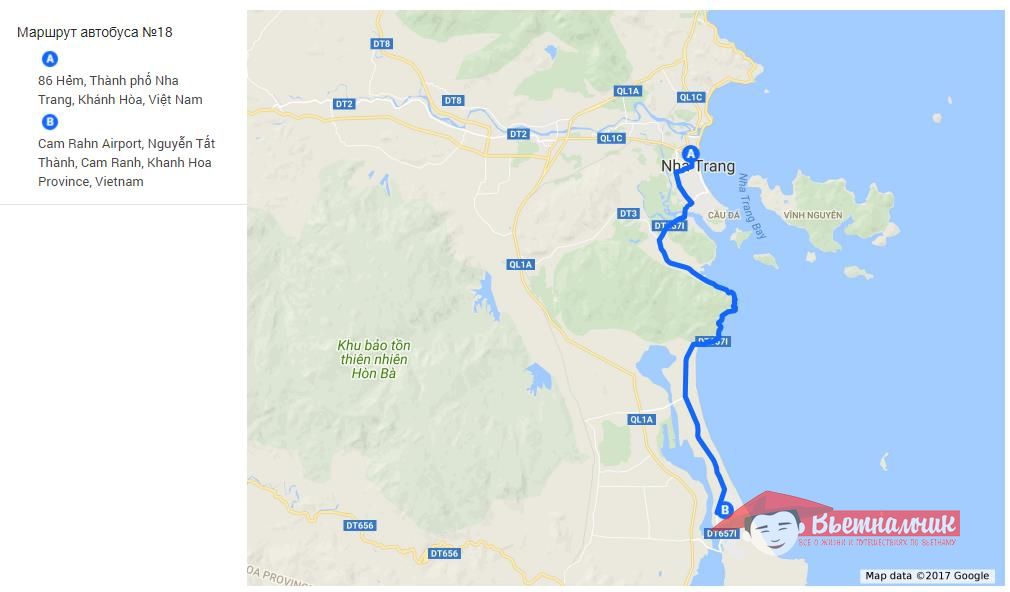 The schedule of the bus Route №18 to the Cam Ranh airport: 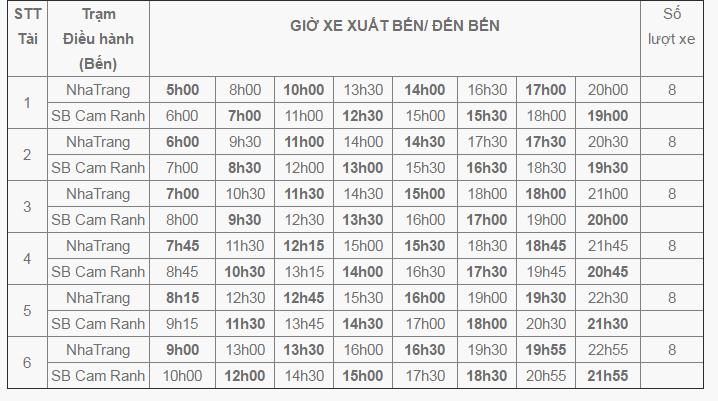 Well, that’s it. Getting around by bus is not only a great way to see the surroundings but also a way to save some money. So don’t be afraid, bravely open the map, choose a place you want to see, and get on a bus.