How you get there

As always, the easiest way you can get to the towers is to rent a motorbike. The ride from “Lotus” (the city center) takes about 10 minutes. There is a parking close to the sight, where you can leave your bike. It costs only 5,000 vnd.

Since the towers located within the city, you can reach them by public transport – take the bus number 4, which costs 7,000 vnd. 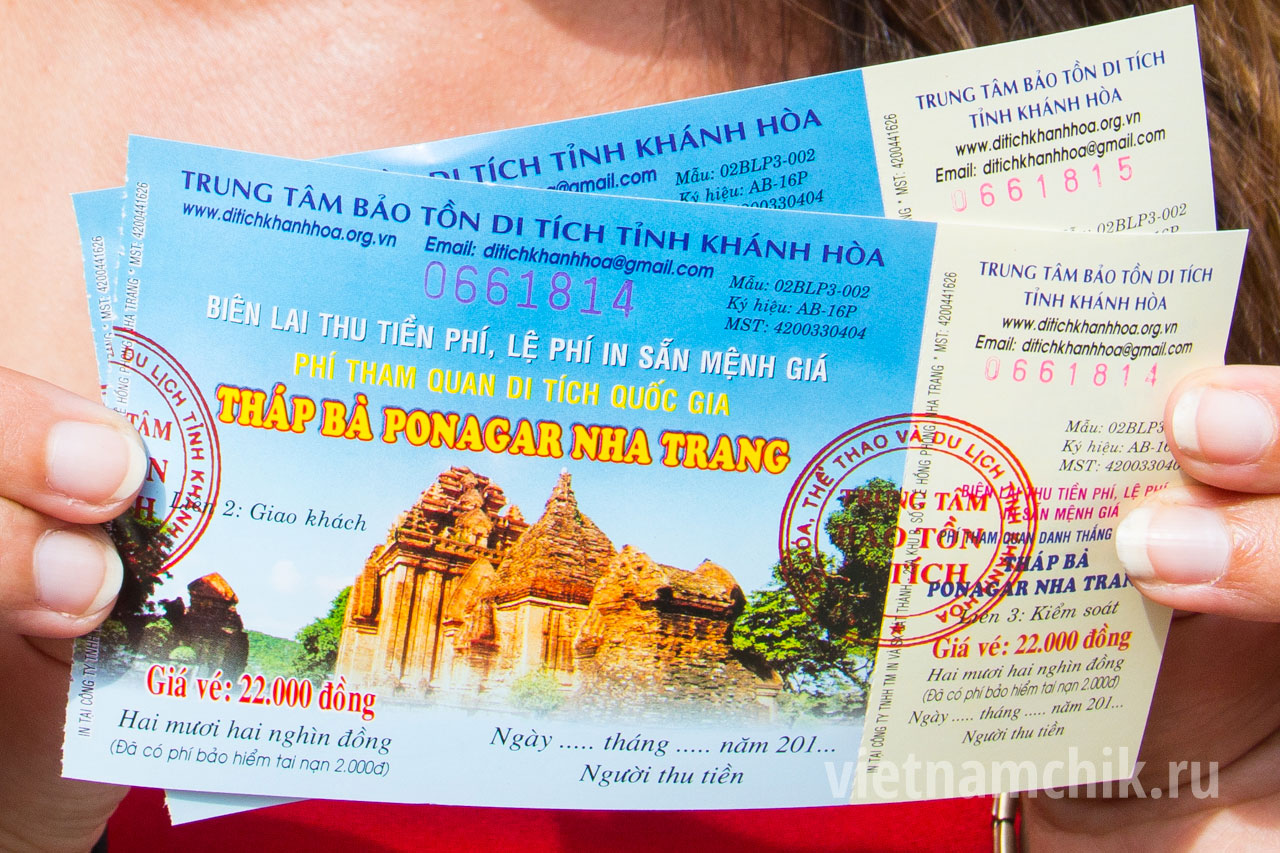 The complex is open daily from 6 a.m. to 7 p.m. You can buy souvenirs near the registers at the entrance. 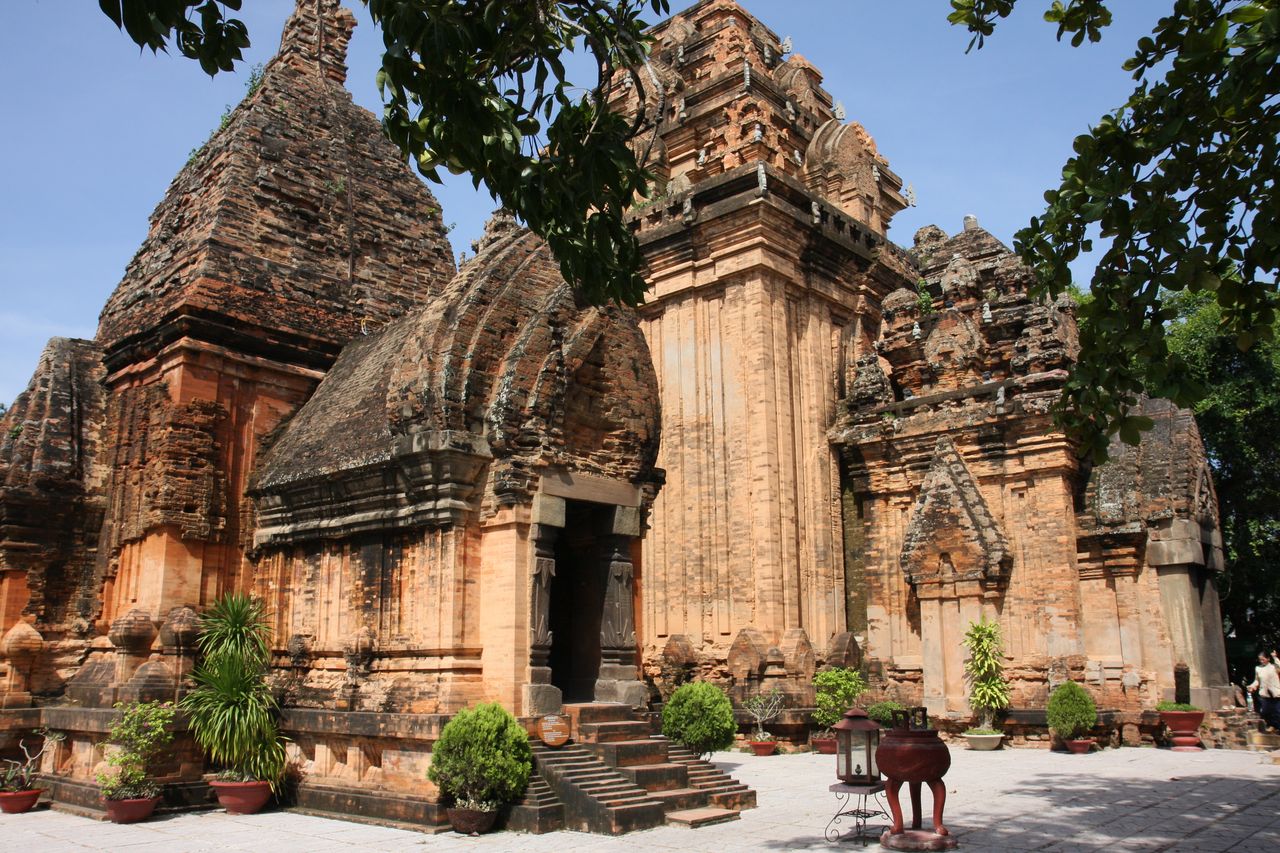 Cham Towers are the most ancient constructions in Nha Trang. Their name pronunciation depends on the region. They have some magical power, so, walking along the towers, you feel the serenity and the antiquity greatness. There is no surprise – these constructions are more than a thousand years old.

The temples are built of a large number of small red bricks, set so close to each other, that it is impossible to push even a piece of cobweb-thin paper between them. They were the silent witnesses of the powerful Cham kingdom, that used to be here. The kingdom existed in the 7th-12th centuries A.D. They started to build the temple complex in golden age of the kingdom. The first tower was built in the mid-8th century. The towers are located on Mount Cu Lao at the entrance of the city.

Pirates assailed the temple many times, tried to conquer it. On several occasions the temple was almost completely destroyed. However, the locals consider the place holy. They disrupted attacks and restored the temple every time.

The complex is considered as “female”. The fact is that in the time of the Cham kingdom ruling clans came under two headings: “male” (yin) and “female” (yang). Male clan located in the mountain gorge My Son, female – on the territory of modern Nha Trang. There were no end of wars for the clans’ territories in those days. Step by step the Chams were assimilated by their northern neighbors and the territories became part of Nha Trang in the first half of the 19th century.

The whole complex is a Buddhist temple, which still functions, although Vietnam holds itself out as a secular state and the majority of Vietnamese are atheists. The temple is kept in ideal state, as it is one of the main places of interest in the country, where buddhish rituals are performed. Sometimes they even perform ancient pagan rituals here, which are obscure for tourists. Formerly immolation was a part of such ceremonies. Today they immolate fruits, plants, flowers. In other words, it is harmless. 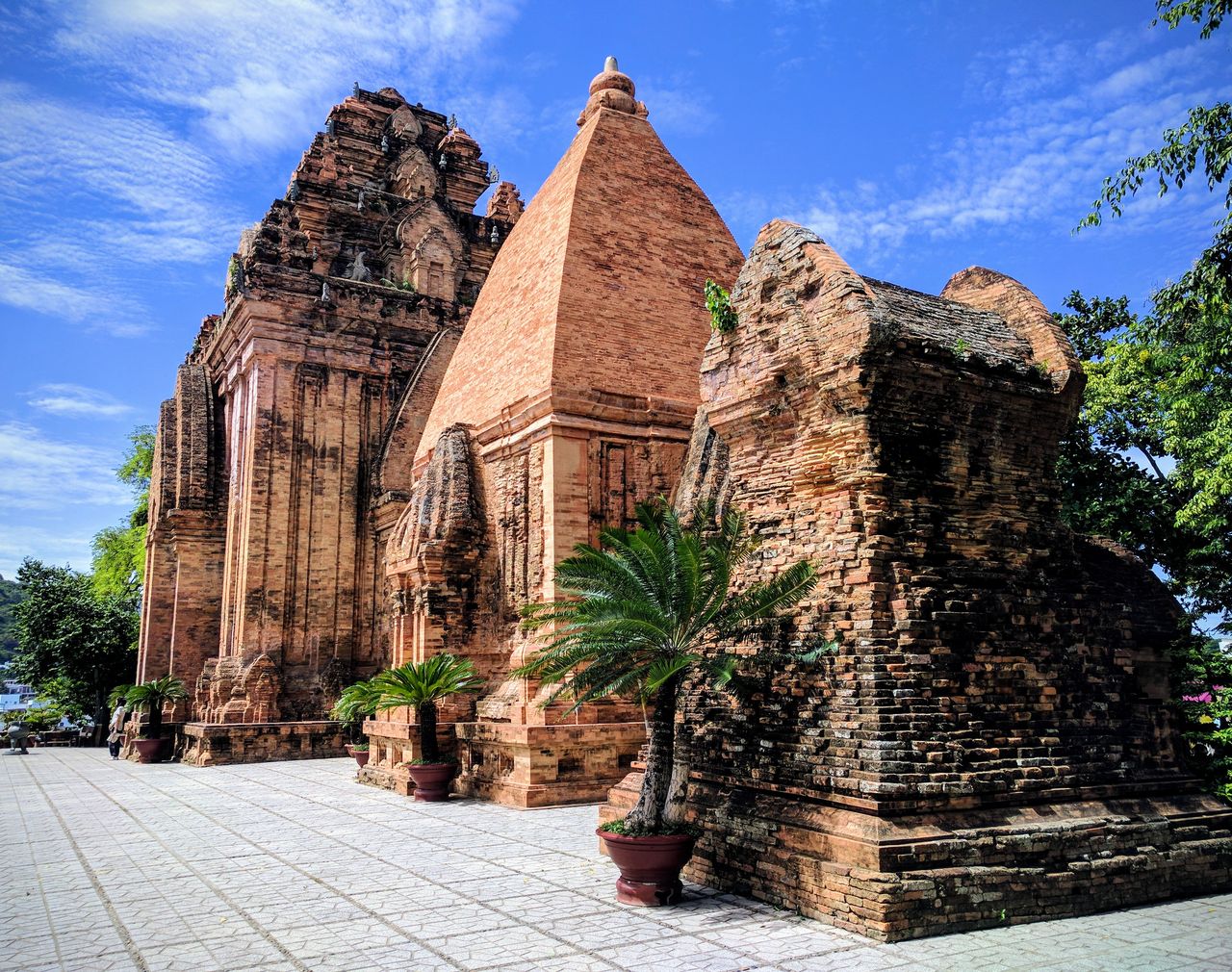 Tourists aren’t allowed to enter the places where monks bend the knees, but the rest of the complex territory is open door for them. There are cozy cafes with buddhish cuisine, break areas, benches, shadowy arbors and good toilet rooms here. Prices in cafes are affordable, the entrance in the towers is free.

You will be amazed by abundance of flowers, small statues, buddhish sculptures, fountains and small ponds. The whole territory is lined with beautiful stones. There are also comfortable alleys among green plants and automatic watering on the lawn. 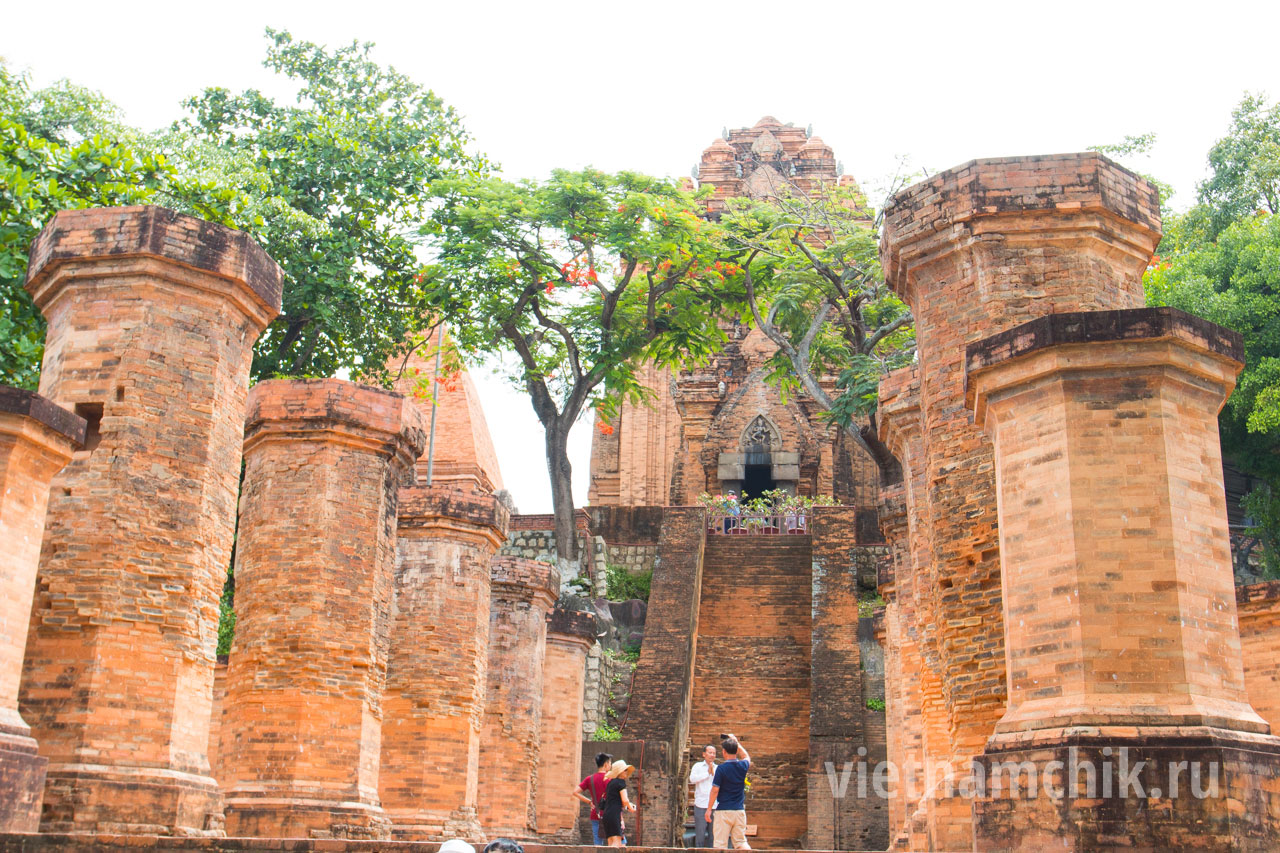 Entrance to the temple complex

You can get the towers, passing through monumental gates and walking up the stairs. But firstly you need to walk through the gallery of the high ancient columns, built alongside the towers, where you will see the picture of goddess Durga, who is famous for her victory over buffalo demon.

Of ten towers, which used to be here, only four are left. The towers’ architecture is diverse, because they were built at different times. The local religious use not the same staircase as tourists. It is done deliberately to save the ancient stairs in their original state. Tourists can take a look at them from the viewpoints. 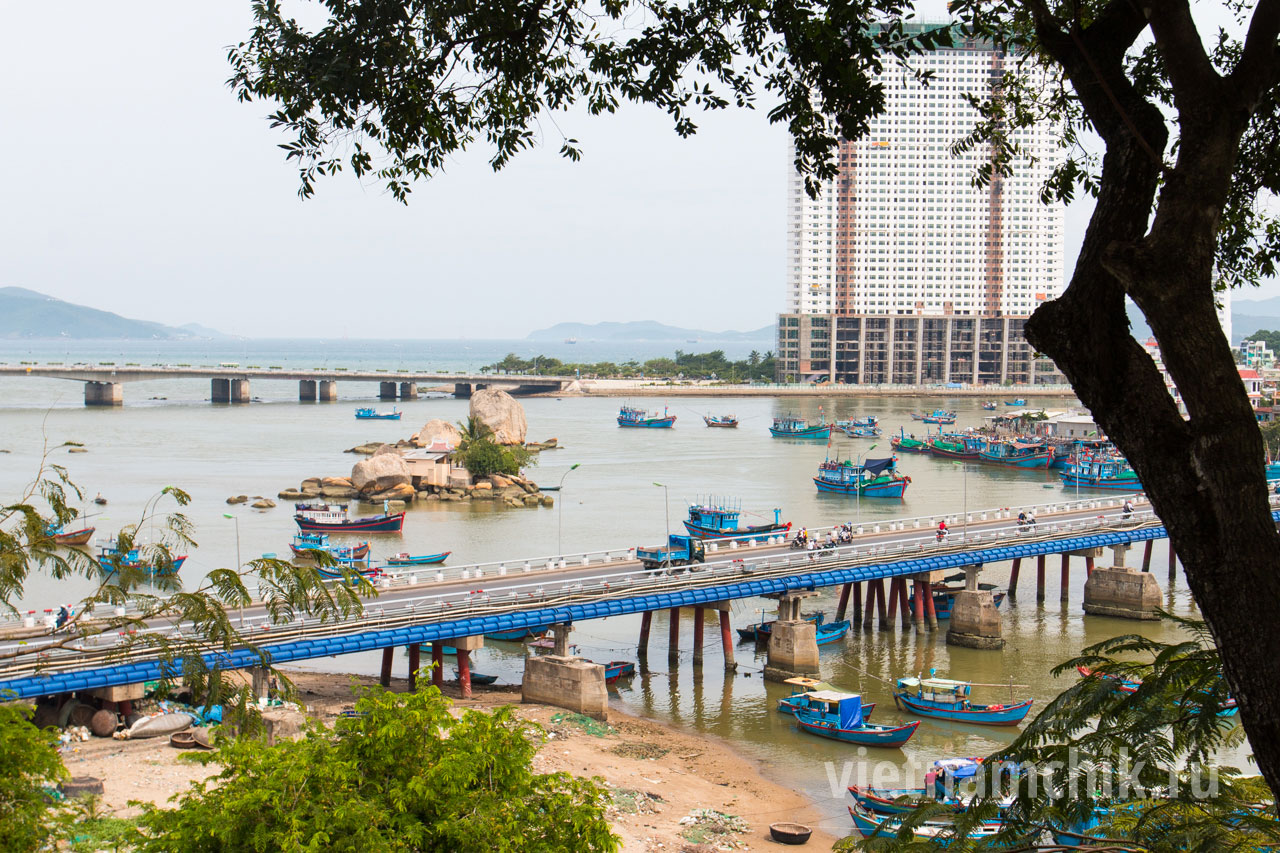 You can feel strong frankincense odor inside the towers – there are lots of aroma candles here. Their light creates the mist and at the same time takes the darkness away.

You should also remember that there is not too much space inside the towers, large groups of people will hardly find room here.

The tower of goddess Po Nagar

The main tower was built in honor of Po Nagar, the goddess of fertility, who taught people different industrial arts. The tower is fancy decorated with pictures of Po Nagar. There is eve her sculpture inside. This tower is the tallest, its height reaches 28 meters. Vietnamese come to the temple to bow to the goddess and ask her about protection for their loved ones.

This tower is an example of Cham architecture, built during the rule of Harivarman I in 817. It was highly decorated, but pirates almost completely eviscerated it at the beginning of the 11th century. Today it is famous for the sculpture of ten-handed goddess Uma and the figure of Shiva (Sandhaka), in whose honor it was built.

Is the less decorated of all towers, was built in the mid-7th century. There used to be lots of riches, but it was looted as well as The North Tower. However it is held in reverence by the local religious. The tower was built in honor of  Cri Cambhu, the god of fertility.

Its local title is Mieu Dong Nam. The tower is dedicated to Ganesh, the god of wisdom and chastity. It is beautifully decorated, there is a great number of antique sculptures and handwritings in ancient language. The religious claim there is a distinctive aura inside the tower, which only a true Buddhist can feel.

On the complex territory you can also see the ruins of The West Tower, built during the rule of the emperor Prakashadharman.

The Cham Towers are houses of worship, so you have to cover your hands and legs before entering. Your head must be uncovered. If you dress improperly, they give you special grey clothes at the entrance, which you should wear in the tower. The clothes is similar to a frock, so someone can mistake you for a local monk. 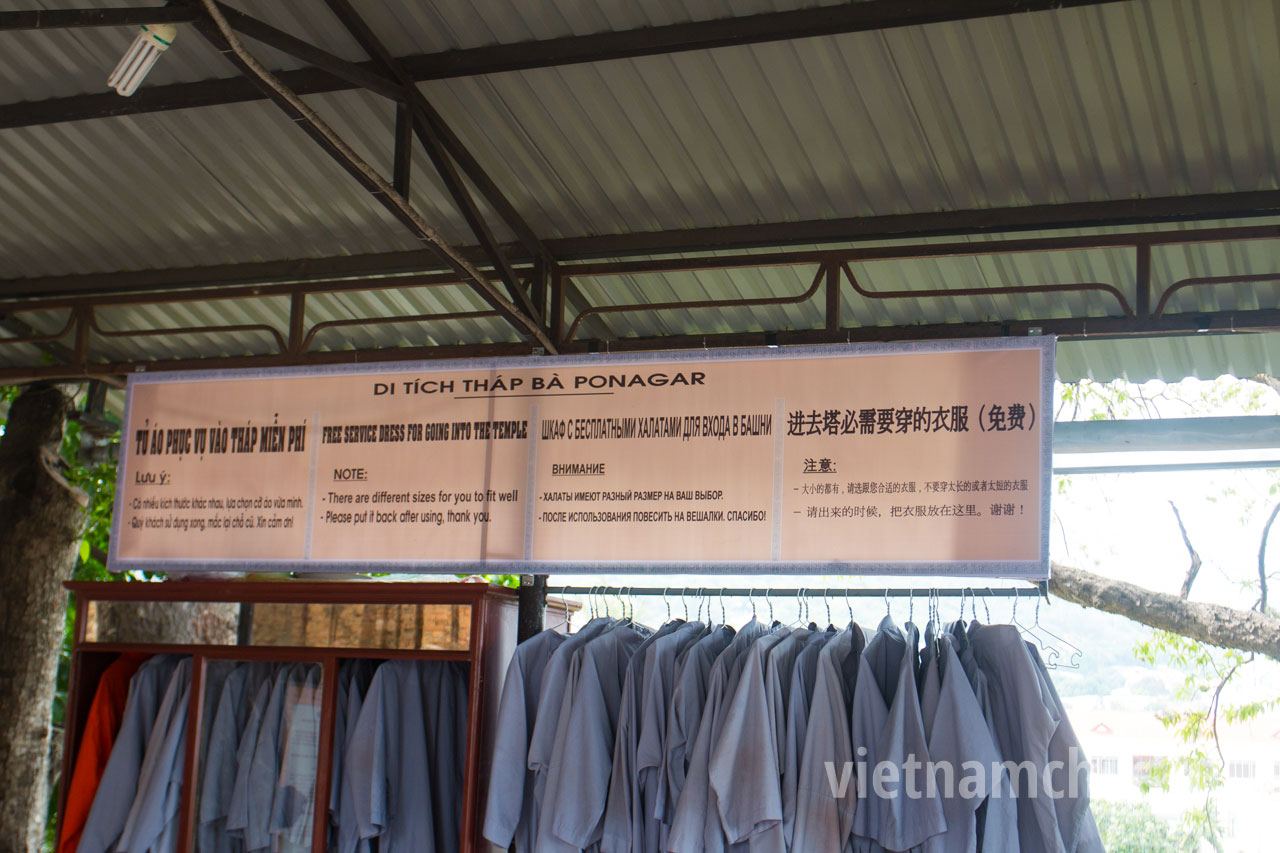 Don’t forget to remove your shoes before entering the towers.

You can come here any time of the year, it is always beautiful and cozy here. We recommend all the tourists who come to Vietnam, to visit Po Nagar Cham Towers.

You’re very lucky if you arrive here in late March. A Buddhist festival is held here at this time of the year, so you can watch and even participate in different rituals, try delicious food. 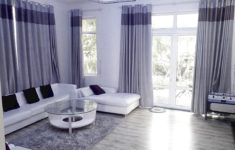 Nha Trang
How to rent an apartment, house, villa in Nha Trang
Nha Trang is one of the most popular resorts of Vietnam among foreign tourists. The influx of tourists in this picturesque ...
Отмена